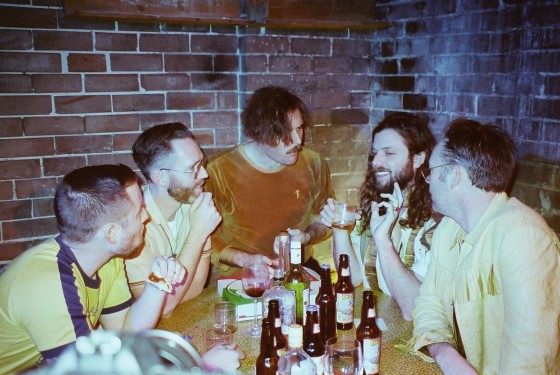 Cinematic alt-folk group, Lazy Colts have today announced the release of their brooding new single, Twenty Two, the second taste of their debut LP, Trojan, set for release on August 5. They’ll be hitting the road in August to celebrate the new LP, kicking off in Melbourne on August 6 and moving on to Canberra, Brisbane, Sydney then wrapping up in Katoomba on September 4.

Twenty Two is a reverent and reflective ode to youth and the naivety that dictates the relationships formed during that time. Emphasised by the pulse of young blood that dictates the arc of the song, the organic nature of the drums, piano and violin resonate under lead singer Lacey Cole’s effortless vocals. Acoustic and raw, Twenty Two encompasses country and folk influences to illicit a rich blend of sound that is lush and satisfying. Of the single, Cole remarks, “Essentially, Twenty Two is about the grand ‘undying’ sentiments that hallmark your first cracks at a serious relationship. It’s about perspective, initially, the lack of it, and then the revelation that the reason you’re in your situation – however great or bad it is – is also the reason you will get through it: you’re only 22 years old.”

Directed by Sarah Adamson (The Preatures, Gideon Benson, Matt Corby), the video clip for Twenty Two is a filmic representation of both the vulnerablilty and the joy of being young. Starring Sydney-based model Evelina Milward, the film seeks to balance the song’s morose male dialogue with a feminine depiction of happiness and beauty. The tone is both nostalgic and immediate; an authentic depiction of youth’s resilience and wonder. Speaking about the clip, director Sarah Adamson says, “I saw this great opportunity to lovingly poke fun at the sincerity of the song. I had this picture in my head of a girl listening to this love song some boy had written her but not really caring as much as he thought she would. She’s doing all these other funny and weird things a 22 year old girl might do when bored at home by herself. She is only 22. She knows there’s nothing to really worry about.”

Lazy Colts’ debut album, Trojan is a fine example of the state of Australian songwriting. Broad, triumphant, and satisfying, yet devastating, emotive and raw, the group have put a mirror to the human experience and Trojan is the result. Mixed by renowned engineer, Mark Lawson (Arcade Fire, Timber Timbre), the release has been two years in the making and calls upon a variety of influences including The National, Nick Cave and Bruce Springsteen. Recorded in part inside a local church, Cole reflects on the process, “I’m not sure the songs would sound the same if they were written and performed in a living room or garage. There is definitely a reverence or awareness of the space and the mood the empty church sets which lives on in the album…Trojan is set against grand backdrops of religion, myth, violence and politics, but the songs themselves are more personal, focusing on relationships and the fleeting moments between people.”

Lazy Colts will be hitting the road on a national tour in August to celebrate the release of Trojan. Giving fans a taste of what to expect from the shows, Cole enthuses, “Audiences can expect energy, passion, dynamic arrangements and musicianship. The rest of the band bring an element of sophistication and skill which strikes a nice balance with my more unhinged vibe. All in all, it’s a good time, it’s like rays of light through storm clouds.”