Britain’s rocking roots trio Kitty, Daisy & Lewis are bringing their infectious energy and nostalgia-soaked fusion of rockabilly, vintage country and first-generation rhythm and blues to Sydney and Melbourne in February 2018.

Delivering their 4th studio album Superscope to Australian audiences for the very first time, featuring Black Van & Down on My Knees, the siblings from North London have been inspiring audiences and gathering an impressive fan base since conception, including Eagles Of Death Metal, the late Amy Winehouse and David Lynch.

Having sold over a quarter million albums, playing to sold out crowds worldwide, including support slots alongside Coldplay, Mark Ronson and Stereophonics, plus performing at some of the world’s biggest festivals (British Summer Time Festival, T in the Park, Bestival, Fuji Rock and Splendour in the Grass) their live set highlights their extraordinary musicianship, a tightly packed multi-instrumental jam session with each sibling playing any instrument they lay their hands on.

Described as a “gift to those of us who still believe in magic,” Kitty, Daisy & Lewis are sibling revelry on stage, captivating audiences worldwide and delivering a set so dynamic they will have you up and dancing by the first beat of the drum. 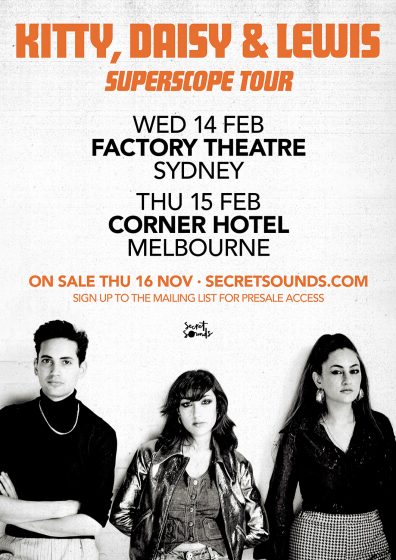