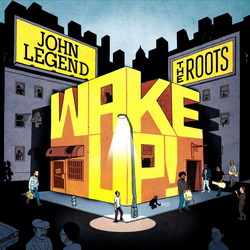 African American history shows that black artists have had the ability to create transcendent music inspired by their surroundings and relevant political climate. Such music was prevalent during the 60’s and 70’s in response to the civil rights movement and Vietnam War respectively.

It is within this context that Wake Up was thought of and eventually birthed. Drawing on the general spirit of change that surrounded the Obama election both John Legend and The Roots have delivered a piece of work that lays out the current climate in the U.S. with respect to a variety of issues.

Wake Up is a collaboration between John Legend and The Roots that hopefully brings further attention to what is currently happening in the U.S. The Roots are no strangers to revolutionary evolutionary thought and expression. All their albums are littered with references to exclusion, discrimination and poverty. John Legend on the other hand has had a successful R&B career, but has never quite delivered an album of legendary status as his name would suggest. It is such a pleasure to finally hear John Legend scale the heights that his voice deserves.

As the name suggests, Wake Up is all about waking up to what is upon not just the U.S. but the world. This recording is essentially eleven covers with one original. The eleven covers all have the same theme running through them. Whether it be change, believing in yourself, or the hard realities of poverty; all of the tracks challenge the listener to pay attention beyond the music.

John Legend’s voice coupled with The Roots funk, hip hop driven instrumentation makes for an interesting listen. This music pushes boundaries, not because it hasn’t been done before, but because no one is doing it at the moment.

If at the very minimum this album exposes the listeners to the artists that originally recorded the songs in this recording; it will be considered a success. However, I would be of the opinion that this album will achieve much more than that.

It has always been my opinion that art should be aimed at presenting a picture of the society from which it was created. Otherwise, it will just fall by the way side and become largely irrelevant within a short period of time. By releasing this set, both John Legend and The Roots, if they hadn’t already done so, have ensured their relevance for many years to come.