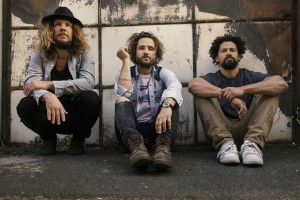 The global release of ‘Flesh & Blood’ has seen the John Butler Trio receive the highest of accolades and sell out concerts around the world as they’ve introduced new drummer Grant Gerathy and their sixth studio album to devoted fans over the past 6 months. Come October, Queenslanders will get their live JBT fill as the band returns home for a brief run of shows in that region. It’s been two years since the band last played Kuranda and since John was in North Queensland performing solo in Mackay and Townsville and 3 years since they played Bundaberg and 4 years since they ventured to Toowoomba. JBT will also return to the Sunshine Coast taking part in the Caloundra Music Festival. Tickets for JBT’s QLD tour go on sale Thursday July 3rd (except the Caloundra Music Festival, tickets are on sale now). See all ticketing info below.

A major highlight of their recent globetrotting was the band’s third foray into the famous Red Rocks Amphitheatre in Colorado filling the venue to capacity with 9,350 people witnessing the bands largest ever headlining performance.
Revered for their brilliant live performances and superb musicianship, the JOHN BUTLER TRIO is one of the most successful independent bands of the current era, both locally and on the global stage. The multi-award winning, multi-platinum selling band is one of those rare acts who successfully straddle across the mainstream and alternative markets simultaneously. Just last week John Butler took out the APRA award for Blues and Roots Work of the Year with ‘Only One’, the first single to be released from ‘Flesh & Blood’. This is John’s fourth win in this category making him the most Successful Blues & Roots songwriter in Australia.

The John Butler Trio will continue to tour internationally for the remainder of 2014 with headline shows and key festival performances such as Bonnaroo, Lollapalooza and Fuji Rock along the way.

When the band returns to Australia in October, Queensland fans can expect a set list encompassing tracks from their new album ‘Flesh & Blood’ along with crowd favourites from the breadth of the trio’s catalogue.
And as a special treat renowned for her unique blend of foot-stomping soul, heart wrenching ballads and stirring live performances, the magnificent Mama Kin will open proceedings at all shows.