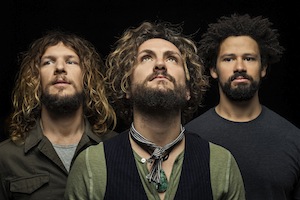 The John Butler Trio recently completed a quick stint of thrilling performances in capital cities selling out small capacity iconic venues around the country as they introduced new tunes and their new drummer, Grant Gerathy. With the trio’s sixth studio album ‘Flesh & Blood’ locked and loaded for a February 7th global release the band are pleased to announce a national tour, their first extensive Australian tour in 4 years. Tickets for the tour will go on sale Friday December 13th 2013.

The John Butler Trio’s ‘Flesh & Blood’ album tour will take in major capital cities and a host of regional centres throughout March and April 2014. Fans can expect a set list encompassing tracks from their new album ‘Flesh & Blood’ as well as crowd favourites from the breadth of the trio’s catalogue.

‘Only One’, the first single from the album, released on November 15th, offers a fresh take on JBT’s signature sound. Cascading acoustic riffs flow effortlessly over driving rhythms while sun kissed steel drums and an inspirational melody and lyric delivers a quality summer soundtrack. It’s already been welcomed with open arms by fans and media alike with community and commercial radio, triple j and ABC radio stations around the country embracing the new tune.

‘Flesh & Blood’ was recorded in John’s studio ‘The Compound’ in Fremantle, Western Australia, with Jan Skubiszewski (Way Of The Eagle) in the producer’s chair.

“Working with Jan was everything I hoped for and more,” Butler says. ” I really loved his musicianship, ideas, communication skills and the sounds he was pulling. His suggestions were always spot on and he really became the fourth member of the band. His experience with the wide variety of music he’s made and produced was just perfect for the eclectic band we are.”

‘Flesh & Blood’ captures the John Butler Trio working up old strengths and finding new ones even at a time of change. For fans, there is much to take from this, their sixth album.

“I hope they go on a journey with it or take it with them on a journey.” Butler reflects. ” I hope it can be the soundtrack for some cool moments in their life and some shit moments in their life and I hope it can be there for them at the ebb of their energy wave and at the crest of it. In the loud times and the quiet times. That would be nice, and I think that’s what all good art’s done for me. It’s been there for me, in one way, or another.”

Brisbane singer-songwriter EMMA LOUISE will be opening shows (except in Hobart ***) on JBT’s Flesh & Blood tour. Her impressive breakout hit ‘Jungle’ alerted many a music fan and critic alike to her stunningly beautiful voice. Her debut album ‘Vs Head Vs Heart’ was released in March debuting at # 12 on the ARIA charts, winning QMA’s Album Of The Year and she was nominated for best female artist at the recent ARIA Awards. She spent 2013 busy touring the world and ‘Jungle’ was recently certified platinum in Italy. You can check out her latest video for ‘Pontoon’ below.

In West Australia, The Stray Sisters (Vikki and Donna from The Waifs) will also be joining the line up to make an unforgettable concert experience. Sister connections run deep. Donna and Vikki get back down home not as “The Waifs without Josh” but as The Stray Sisters, rediscovering their love for singing and performing together. It is through harmonizing that Donna and Vikki forged a intuitive understanding of each other. The Waifs was their public vehicle but at home the sisters loved to sing and connect through the songs they grew up with. With The Waifs temporarily out of action and Donna and Vikki living on opposite sides of the world, both felt the desire to return to the stage, inviting audiences to share in the joy of connecting through song. They will be performing new material as well as reworked favourites from The Waifs.