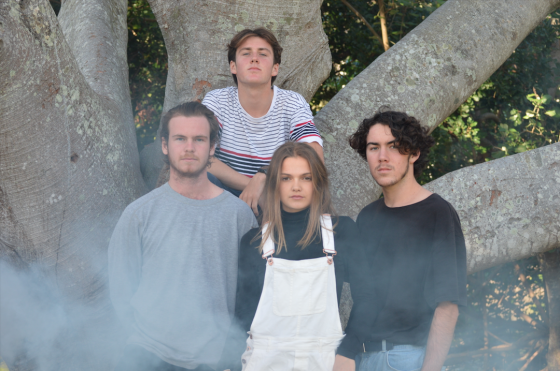 Fresh faced and creating a unique blend of surf pop there is no holding back IVEY, a band made up of 15 – 18 year old mates who are wrapping up 2015 in style with the announcement they will support an impressive list of touring artists over coming months including British India, Art of Sleeping, PLTS and The Belligerents.

They say nothing is sweeter than young love and the latest single “Smell of Smoke” from the Gold Coast indie outfit IVEY evokes the senses through hypnotic vocals and lyrics that truly create nostalgic imagery of ones first experience with love. “Smell Of Smoke” has already received much praise online.

Recorded and produced by George Carpenter (WaxHead, Donny Love and Salvadarlings) their last release “Smell of Smoke” builds slowly with its simplistic yet intricate movements. Birthed after an emotional break up it doesn’t rely on anything more than it’s honest lyrical and vocal delivery matched with IVEY’s the up beat tropical pop sensibilities reminiscent of contempories San Cisco, Hungry Kids of Hungry and Monsters of Men.

The 4-piece outfit are winning over industry figures and new fans alike after receiving national airplay from Triple J as part of the 2015 Unearthed High Competition. Although the band officially formed in April 2013, IVEY have a long history that is forged by family and lifelong friendship. With a friendship spanning over 12 years, brothers, Lachlan (lead vocals/guitar) and Matthew (Drums) grew up only a few doors down from Dante (Bass guitar) in beautiful Broadbeach. Influenced by garage surf and their coastal surrounds the boys later forged there jangly pop sounds with the addition of 14 year old Millie who’s unique vocals cemented the playful and nostalgic memories of childhood friends which are evident in the joyful, beach pop sounds.