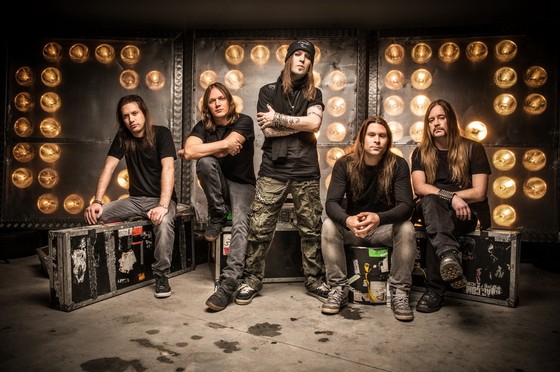 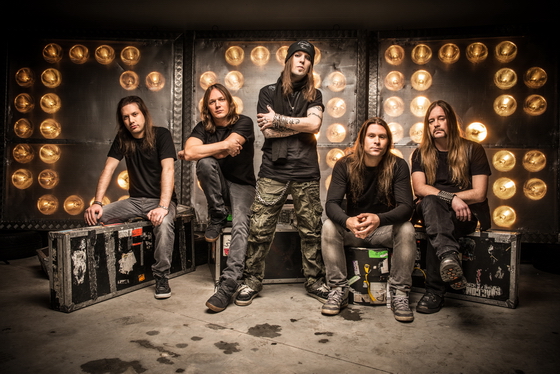 Ahead of their “HALO of BLOOD” Over Australia 2014 east coast tour, Children of Bodom drummer Jaska Raatikainen took time out for a chat.

Now that ‘Halo of Blood’ has been released for some time how does the album sit with you, in the scheme of your back catalogue?

Jaska: I think it is just normal and natural continuation for the band and sits just perfect to our back catalog. If thinking only music track by track there is maybe a little bigger variety between the songs on the new one. Meaning that we have perhaps the fastest and also the slowest ever song on the new release. And also a one very “rockish” song.

The album has a real clean, yet powerful sound, did the recording/production process for Halo of Blood differ from previous releases?

Jaska: This time we did the album again with Mikko Karmila. His sound is very natural and clean. This time we had also drums a little louder in the mix and didn´t hide them behind the guitar wall.

The album hit me as being really accessible and easy to get in to straight away and the song structure and running order flows extremely well. Is this something that was conscious within the writing process and production or just organically came about?

Jaska: I think the song structures are more simple and make more sense nowadays compared to early days. That is something that comes out with the experience yet at the same time we don´t think it too much. Running order you only know when the songs are all mixed and you are ready for mastering the album. Then you can listen to the songs like an outsider and can put the songs in the best possible order.

The cover song “Sleeping in My Car” by Roxette sounds great at the end of the album, how did this song come about for COB to record?

Jaska: I was driving in my car to record the drums and listening to radio and this song came out. We didn´t really know at the time what covers we should do. So, we were kind of waiting for the right moment, inspiration so to say, to realise what to do. This was an instant hit.

How did the concept of the Halo of Blood cover, depicting the reaper in the snow come about, and how do you see this image as a representation of the album?

Jaska: The time when we were working on the new songs was dark and cold and suited perfect to the atmosphere of the album cover. We wanted to have a white, cold and mean album cover this time.

What inspires you as a drummer to write music and extend yourself as a musician?

Jaska: Well, while the whole band participates in the arrangements, sometimes Alexi comes to the rehearsals with an idea about what the song should sound like, with rather specific things I should do with drums.Other times, I propose something get some feedback from the rest of the band, and work with it. It’s a cooperative thing. I also play the piano and the French horn and course if you have that kind of technique, like classical training, it’ll help you. Of course, the way you’re thinking about things, it might make you a little more… unique.

Jaska, you have established yourself as a talented and well respected metal drummer, but who do you look up to as a drummer within metal?

Jaska: Well I always loved Judas Priest, Scott Travis on Painkiller is incredible. I always loved Motorhead and Mikkey Dee! As a drummer, he’s badass, his playing and timing was something that I really got into. There is no specific album, nothing like that… just the drumming itself, I liked it. But l I was also a huge Death fan, so I would have loved to have worked with them.

To the current tour, in support of Halo Blood, how has your set list and stage show differed from previous tours?
Jaska: We wanted to have more older songs that we haven´t played in many years in the setlist. Also, the new tracks were fitting perfectly by giving different drama to the show.

You have toured Australia a number of times, what is your impression of Australian audiences?

Jaska: The crowd is always very good in Australia. I am really looking forward to be there and see that crazy but honest audience in our shows.

What message would you like to send to your Australian audience on the eve of the tour?

Jaska: See you in the front row!!

Children of Bodom – “Haloed in Blood Down Under” – 2014 Tour Dates
Wednesday 7th May 2014 – Billboard The Venue, MELBOURNE (18+)
Tickets from www.metalmassacre.com.au / www.moshtix.com.au / www.ticketek.com.au
w/ EYE OF THE ENEMY + ORPHEUS OMEGA

Friday 9th May 2014 – The HiFi, SYDNEY (All Ages)
Tickets from www.metalmassacre.com.au / www.thehifi.com.au
w/ EYE OF THE ENEMY 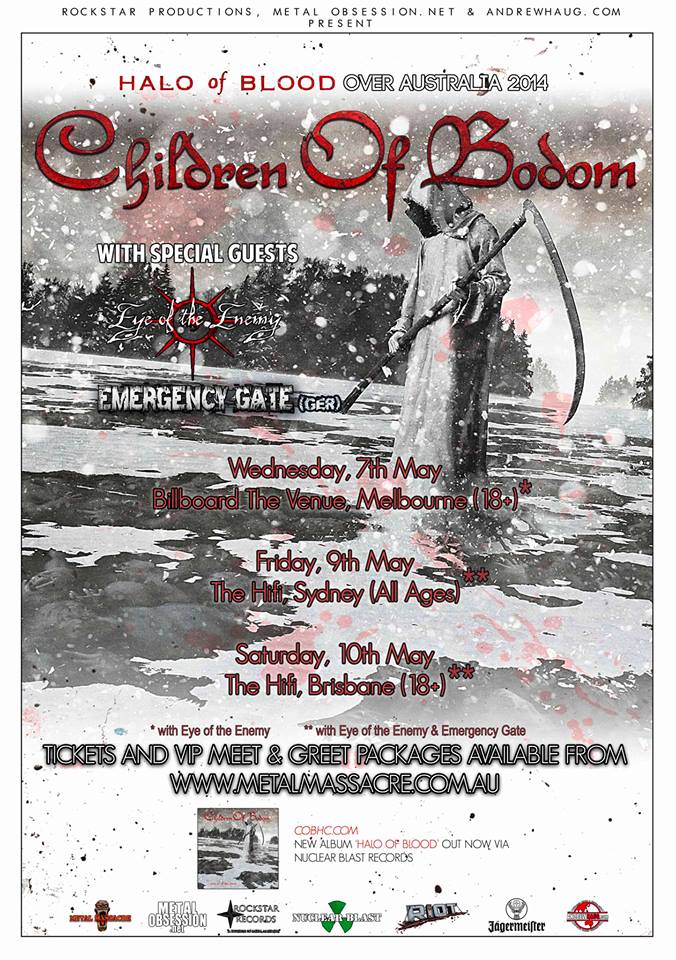