Following the release of his debut album ‘Broken Bones’ and with an upcoming tour with Powderfinger’s Darren Middleton kicking off on in January 2015, Guy Pearce took time out to chat with LifeMusicMedia.com

First of all, congratulations on the successful release of your debut album – Broken Bones. Is it a relief to, not only have the album out but see so many people enjoying it as well?

Thank you! Yes, absolutely . ‘Tis quite weird too as I’ve been making music my whole life really on some level or other.

Yes I think so. I know there are lots of people though, who still cringe at another actor releasing music so I still have to face that but generally the response has been one of positive surprise

You’ve mentioned in previous interviews that your reluctance to release arecord over the years was something you weren’t prepared for at the time. What made you decide, “Okay, now is the perfect time for people to hear these songs”?

I don’t think it’s a matter of thinking now is the perfect time for people to hear these songs, it’s more about finally realising the importance of getting over my own fears and just expressing something that means a lot to me, as well as just generally feeling better about the music now than ever before. No one would’ve wanted to hear the music I was making in the 80’s. It was good that I was fearful of releasing it.

Were you nervous about having a larger audience hearing your music for the first time?

Yes, I suppose,e but as I say realizing the importance of getting things out of my system far outweighs any nervousness I might feel. Ultimately, as Michael Barker said to me “if they don’t like the music, it’s not for them.”

From my perspective, Broken Bones feels like an album that comes from an honest, personal space. How much inspiration did you draw from your own experiences and stories to write the album?

It’s all either based on personal experiences, observations or personal imaginings. I suppose like most people I write from my own experiences even if I elaborate or combine or draw on other people’s experiences. To me the whole album is about our emotional selves and our need to question our identities. So whether the experience is mine or someone else’s, the emotional part of the story will have affected me greatly at some point.

That being said, is there a particular song on that album that holds the most significance for you?

Not necessarily. They all feel very personal but that might actually be more to do with the musical journey I went on with each song rather than the story of the song itself. I go through phases of having favourites from the record but I think they all feel equally significant to me.

You’ve recently played two album release shows – one in Melbourne and one in Sydney – did you find the songs took on new life or found new meaning in front of a live crowd?

I don’t think they took on new meanings but they certainly felt different in front of a live audience, partly also because some of the musicians were different. Certain nuances in the studio can get a bit lost live but the energy of the tunes certainly picked up and so the there was a different vibe.

Fans that may have missed the release shows will have a chance to see you again, as you’re heading out on the road with Darren Middleton. Are you looking forward to getting out on a more extensive tour of Australia?

Absolutely. It’ll be nice to share the songs further a field, and also will be really cool to play with Darren, although a little intimidating, I have to admit.

Is there a venue or part of Australia you are looking forward to playing in particular?

Definitely back at GPAC in Geelong. I did a number of theatre productions there in the early 80’s so it will be great to be in the Ford Theatre and playing for a Geelong crowd.

Finally, what advice would you offer to another musician or artist – who may be reluctant about sharing their music or art with a wider audience?

Remember: you can’t please everyone. 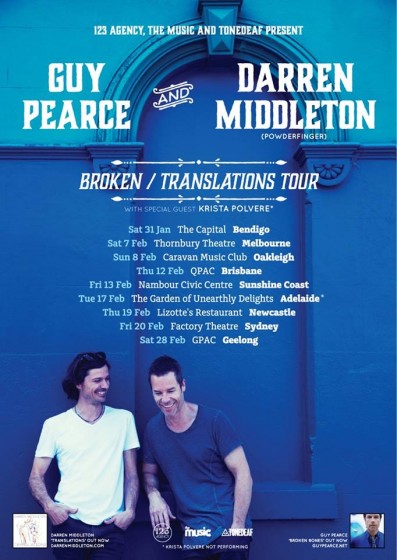