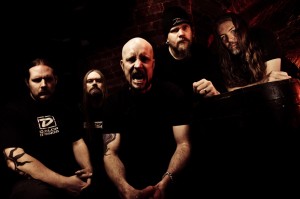 MESHUGGAH: The crowds. It’s always great to get to play in front of a good festival crowd. And Australia has that!

MESHUGGAH: Port-a-pottys. If you mean what festivals have been the worst/best they are just too many to mention. At both ends of the scale.

MESHUGGAH: I don’t know if I have any to be honest.

MESHUGGAH: No, not really. Maybe I should get one. But honestly we’ve never been like that. It’s very disorganized before going on stage. Waiting around I guess he,he


LMM: What other bands are you excited about touring around Australia and sharing the stage with?

MESHUGGAH: Devin Townsend. There are alot of cool bands on this Soundwave. Mastodon, Machine Head…


LMM: What is the most important thing you bring when your on tour?

MESHUGGAH: Guitars. I mean apart from clothes and our gear there really isn’t anything apart from maybe my Mac that I just can’t do without.


LMM: Does the band have anything special planned for Soundwave 2012 in particular?

MESHUGGAH: Not apart from bringing a good live-set back to Australia. We are switching the set-list up a little bit from the last two times and like I said we MIGHT do a new track from Koloss.


LMM: Is there anything you’d really like to do whilst you’re in Australia?

MESHUGGAH: Yeah. And here comes the sterotypes. I’d love to go snorkeling off the Great Barrier Reef. I haven’t had the opportunity to go fishing and I’d love to do that.
I’m a snake guy and used to keep a shitload of snakes so I’d like to go look for snakes and stuff….theres more too but…you know.


LMM: Everyone knows it takes forever to get to Australia, what are you going to do to pass the time on the flight over?

MESHUGGAH: Trying not to kill myself. Its just the ususal. Catch a film. Read a book. Sleep if I can. I have a real hard time sleeping sitting up though, so long flights are really a bitch.


LMM: What does the band have planned for the rest of the year after Soundwave 2012 finishes up?

*All shows are licensed and all ages
*Venue and lineup subject to change
For all information and Soundwave updates, head to www.soundwavefestival.com