Judith Lucy‘s Not Getting Any Younger
interview by Lisa Lamb.

Judith Lucy is one of Australia’s most popular comedians and one of few Australian comics to be invited to the Just For Laughs Montreal Comedy Festival, twice. In 2009 she celebrates twenty years in comedy with her new show Judith’s Not Getting Any Younger.

Judith, you’re a single successful independent girl, is it time those men started battering down your door?

JL: I think they should have done that when I was sixteen. Come on Brisbane guys get your engines running!


Is this a show about coping with getting older?

JL: I did turn forty last year, so that has had an effect on me, along with global warming… and there is a segment called “Ask a young person”, in which I ask why they are removing their pubic hair? Let’s hope that’s not a nerve wrecking experience, aside from that I’ll be banging on about myself and hope that nobody notices.

You recently performed at the Opera House. How was that experience?

JL: Well they have asked me back in July, so I’d say it was pretty good. Though the Opera House is way more glam on the outside than the inside.


You have had an extremely successful career, stand-up comedian, television, radio, film, now a book, The Lucy Family Alphabet. If you had to pick one of those, which one would it be?

JL: Well, commercial radio and I aren’t friends, I think the only gig they’d give me would involve me sitting in a wheelbarrow with a megaphone, and I haven’t been asked to do a movie for years, cos that’s actually a question I do get asked quite a lot by well-meaning people. They’ll go, “When are you gonna be in another movie?” Or, “Have you got offers?” And I can honestly tell you that the only offer I ever got after both ‘Crackerjack’ and ‘Bad Eggs’, was they asked me to appear on ‘The Mask 2’. Yes, but if the Cohen brothers have a role for me, sure.


All your shows seem to develop from personal misfortune, being adopted, being fired, people dying etc will this show have a similar theme?

JL: Well yes I usually do exploit my tragedies for cash, but this is my happy go lucky show, nobody is dying, nobody is being fired. Though I did go to Italy last year with my biological mother. That was a crazy carnival ride, sharing a room with a seventy year old. Don’t pack the condoms!


You also talk about your parents being freaks?

JL: Well freaks is such a harsh word. They were unusual. My father wore a great deal of make-up. Basically he wore a lot of powder, a lot of eyebrow pencil, a lot of foundation. And the day I did turn to him finally and just say, “Dad, what’s going on with the foundation?” He just said, “It’s sunblock.” And that was the end of conversation. So that’s one. I didn’t have a shower till I was 15 because Mum told us all the shower was broken, and it wasn’t. So we used to wipe ourselves down with a kitchen sponge, look, it was a clean sponge. We weren’t odd.


And your mother had a nervous hearing problem?

JL: Well she was a pathological liar.


You write in the book, “I worked out that while I had a problem with anger in real life, I could unleash my fury onstage about all the situations that left me feeling powerless at the time. My parents became the backbone of my act.” When did you hit on the idea of family as the source material, great source material for comedy?

JL: Well I wrote the book because somebody said to me “You must really hate your parents” and I don’t. So I wanted to show them as real people and try to understand them, instead of just being characters on stage.


Will there be all singing and all dancing on this show?

JL: Well the audience always want me to expand my many talents and I have had singing lessons. The teacher counts me in by saying ‘one, two – you’re on, Toots’ – and it makes my day every time. This man’s life is musical theatre and it rolls off his tongue very easily. And I’m very easily pleased. Plus he is very cheerful, so he may be deaf. 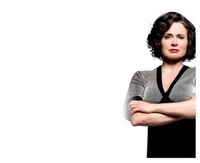