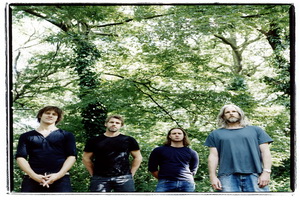 You may remember Reef for their 1997 hit “Place Your Hands ” from their Glow album or you may remember them from their Hey Hey It’s Saturday performance when they hilariously reacted to the poor treatment of some young Red Faces contestant by trashing the stage whilst screaming “Your Old”. Reef then threw down their instruments and literally did a runner. An angry Daryl Somers stared down the camera and boldly claim that Reef “will never work in this town again!” But alas poor Daryl it looks like Reef and their Aussie fans that are having the last laugh.

Reef have been doing sporadic appearances at music festivals in the UK since 2009, Life Music Media asked about the decision to tour Down Under again as it seems unusual to suddenly choose Australia as their biggest tour reunion tour yet. Gary laughed down the phone “I mean why not tour Australia!! We’re always fairly successful in Australia, we went there three times in the Nineties and we had sold a lot of records, we got gold records there and we always get a really good vibe from the audience there. I have a lot of time for Australia, I’ve never had a bad vibe there and I am really looking forward to it”

We asked about the circumstances surrounding their reunion, “Well at the time I was in a band with Jack Bessant [Reef bassist] called Them Is Me and at the end of 2009 our manager, Tank, got us [Reef] together for a bit of a curry, a few beers and a chat about a reunion and being all together. Well, being all back together felt pretty natural but I told Tank that I felt I should think about it overnight. So anyway, I rang Tank back the next day and said ‘all right’. It just felt right, that it’s the right time. You know that I am a singer, it’s what I do, it makes sense to keep performing the songs that you last did over 10 years ago and these songs are still popular, they still get played all the time and they are still earning you money”.

“So when we had some time spare in April 2010 we did a couple of shows and they all sold out which was really good, then off the back of that we kept on going, we did Glastonbury and Isle of White and then did some touring of Europe and Ireland and now we going to do a tour of Australia!”

The breakup of Reef has been fairly well documented but we wanted to get Grant to give us his authoritative version, “We started in 1993 and had a really good 10 years. We were a real band and we went out there not afraid of anyone, you know we had great respect for the other bands at the these festivals but we were able to go anywhere in the world, play any of these festivals and really win the crowd over, and have a blast. Everything about the band was good but it was only the last six months from about August 2002 were it just felt like work you know. Then Dom [drummer] left in January 2003 and we were all exhausted with Reef, we just could not go on anymore. But looking back on those ten years you could say we were really blessed, we toured everywhere, all over the world really, staying in all the plush hotels and hanging out with top models and running around and having a laugh, but then it became like work at the end we all decided to down tools and put our feet in the sand and decided just to relax, hang out a bit.

Most people would remember Reef from their huge hit “Place Your Hands” from their 1997 Glow album, a song on constant rotation, it sounds as fresh today as it did back in 1997 and their music video is also pretty damn cool to watch as well. “Well I am surprised you mention the video, people still say the song sounds fresh and relevant today, but not the video! The song still gets played all the time, especially on Radio 1 over here, I really don’t know why it’s so successful but I guess the song just connected with people when it came out, and it connects with people now, I just can’t think of any other explanation. I think a lot of it comes down to the production on that album [Glow]. The production was fantastic, as you know with George Drakoulious [Black Crowes producer] Jim Scott [engineer] you know a lot of heavyweights worked on that album, there was Benmont Tench [Tom Petty & the Heartbreakers] doing the keyboards and we also had Chris Trujillo on percussion”.

Unfortunately Reef won’t be producing any new material but if your desperate you can check out StringerBessant, which is Gary Stringer, Reef bassist Jack Bessant and as a guest star, Reef drummer Dominic Greensmith, Reef Lite if you will. Also if you are a hardcore fan, Reef have just launched, their massive 9cd + 1 DVD box set called Reef 93/03, it contains everything single song they have ever recorded, including their original demo tape, the Purple Tape.