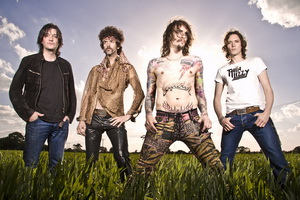 We started off asking Frankie about why The Darkness decided to reform after their fracturing and eventual drug induced implosion in 2006? Frankie exclaimed down the phone that it was “A sense of duty, we have a sense of duty to rescue people from getting their ears assaulted by vacuous soulless music”

We thought Frankie may be talking about the huge impact of bands like One Direction, especially after the sickening adulation they received recently from the Australian media, but to our surprise Frankie was actually supportive of One Direction and more critical of the bands in the UK indie scene. Frankie proclaimed, “Well some of their [One Direction] melodies are quite good I think, and they’ve done well in the States and you don’t do well in the States unless you’ve got the chins to back it up, and their quite charismatic. There’s always a place for good pop music so I don’t have a problem with them at all, but I have a problem with what we call in the UK ‘landfill indie music’, just really generic guitar bands”

“The point of picking up a guitar is rebellion and having something to say, it’s supposed to make you a little bit different but they’ve all become very generic, so that’s why we came back, that’s the main reason. Also to have a good laugh together as well. We did end in a very sour way last time, so really we wanted the chance to make it good again and come up with a happy ending this time”.

So Frankie would you consider yourself and The Darkness to be older and wiser now. “No we don’t want to be wiser! We don’t think being wiser is a particularly good thing to tap into. Wise guitar music doesn’t sound very appealing does it? Wise music is best left to someone like Sting and Peter Gabriel. We’re defiantly still silly, we like to tap into silliness.”

We asked Frankie about the new album coming out midyear; so far very little details have been released about the album at all. Frankie was able to give us a little insight though, “Well it’s myself and the Hawkins’ brothers getting together and tapping into what made us musicians in the first place. The Hawkins brothers have been bought up in a part of England which is detached from the rest of the country, South East Anglia, so it’s them being true to the themselves I think, true to their roots”.

“The vibe I would say is, well a lot of it is drive time music, like driving rock n roll music, it’s also punching air music but there is some very heartfelt music as well, very melodic. There are moments kind of like Roy Orbison or Bruce Springsteen, some melodic moments. So it is eclectic like the first album, where there were acoustic power ballads, then there were songs about hellhounds and “Black Shuck” and punky songs like “Get Your Hands Off My Woman”, so this album has the same range, the whole thing is really guitar music, there’s lots of solos. So yeah it should be coming out around July”.

So what does the immediate future hold for the Darkness? Frankie gave us a surprising answer “Well we’re supporting Lady Gaga for a while, then we’re playing lots of festivals this summer. I guess our cause is just to be the leaders in a field of one, which is what we do, a rock n roll band with the sense of fun, a sense of drama. James Dean Bradfield from the Manic Street Preachers described us a vaudeville band, maybe that’s what we are.”

WTF Lady Gaga? Hey you’re right, you guys are supporting Gaga on her 2012 tour. So how did that happen? “She just asked us” said Frankie quite proudly “She likes us apparently; we didn’t know that, it kind of makes sense in a way, joining people who don’t care what other people think of them, who aren’t afraid to look ridiculous. This is an audience of outsiders, what some people call freaks. That’s a good thing, the great musicians of history were freaks at one time or another and then they became gods, just look at David Bowie, he was an outsider, a strange guy, rejected by a lot of people. Successful musicians embrace that ridicule and realize ridicule is nothing to be afraid of.”

Frankie explained that this is the problem with the current UK indie scene “There’s no current band that have been through that process, no bands are being ridiculed because they haven’t put themselves in the position to be ridiculed. They haven’t pushed the envelope, they are just trying to fit in, they are trying to be cool, to be cool is the consensus. The middle class media term what as being cool and it is just fitting in, you fit in to all these rules of what’s acceptable. It’s not too inspiring.”

We thanked Frankie for his time and he told us he was excited to come back to Australia “I am looking forward to it; it’s been a long time, 6 years in fact!”

The Darkness will be touring Australia briefly at the start of May and their new album, of which details are still under wraps, will be released around midyear.