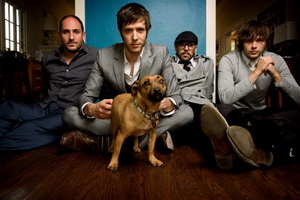 At the tail-end of OK Go’s European tour, lead singer Damian Kulash braved a Danish snowstorm at 2am for a conversation with LifeMusicMedia about the colour blue, his love for Australian butter and the importance of body part insurance. Oh, and also why their latest album, Of the Colour of Blue, sounds so different from anything they’ve done before…

LMM: Aside from the snowstorm you were just caught in, how has the tour been?
DK: It’s good, this is actually the last night and it was good fun.

LMM: Anything you’re not looking forward to?
DK: No, I guess it’ll be really warm over there, the only thing i’m dreading is that sometimes, when you from really warm to really cold you get sick, and there’s nothing worse than getting sick on tour ‘cause it’s such a drag.

LMM: There’s been a bit of a surprised reaction to the new direction your sound has taken with this third album. What were you trying to achieve with it?
DK: You know, I feel we were trying to just be, like, excited by it, and there was much less of a blue print than anything else we’ve made. I think, the first record for instance, I remember thinking, how come the world doesn’t have stadium rock anthems anymore? Well let’s write a stadium rock anthem, and you know, out came “Get Over It”. I think back then we sort of imagined the song and tried to figure out our way to it. And that just doesn’t work for me anymore. I don’t know why, but when I started writing this record and using the same old bag of tricks, it just felt like we were copying ourselves, it didn’t feel genuine anymore…

LMM: I read in an interview in which you described your song-writing style more as ideas-based rather than jamming-based. What ideas were in your head when you started writing for this album?
DK: This was much less based on a large scale idea, what I think we did was start with really basic elements, like a drum beat or the timbre of a piano sound, or a synthesiser and chord progression or something, and just looked for the weird sort of alchemy, the moments when drum beats plus chord progression don’t just equal drum beat and chord progression, they equal melancholy or lust or joy, or more accurately all those together. Something like a six-dimensional emotion that can only be communicated by music. And so I think we were looking for feelings more than we were with thoughts, and it meant a lot of trial and error, because you know you can spend all day playing a drum beat and a chord, and most of the time it’s just a drum beat and a chord. It’s one in a thousand that will suddenly mean something. And so we didn’t really jam this record but just did a lot trial and error and it wound up being a sort of mirror to ourselves. I think what you hear is the way we hear music, not how we write it.

LMM: What was it liking working with Dave Fridmann as your producer?
DK: He’s a spectacular producer. what I love about dave is, well lots, but he works by himself. There are no assistants or runners or interns or staff of any kind. It’s just the four of us and him in a barn in the middle of nowhere. And he’s a spectacularly good producer, and a technically good producer. Like, if you went in there and said “I wanna sound like Axl Rose,” he would get it exactly right, or if you said “i wanna sound like Odyssey and Oracle by The Zombies” he can get it exactly right; he can make those sounds.

But what he can do that nobody else can is open up this three-dimensional space that just, I never heard that anywhere but from Dave and I think that every band plays in there differently. I think MGMT and the Flaming Lips and Mercury Rev have very different, they all sound very different from us but you can hear how he has the key to that door all the time. and it’s weird because it’s both over-thought and spontaneous at the same time, like he sets these really crazy systems of guitar pedals and effects and things plugged in backwards and it gets so out of control that you wind up where the only way you can play it is spontaneously, you know, and you try to catch the good moments as they fly by and there’s no way you can ever create that again. It’s really fun.

LMM: The A.J. Pleasonton book whose title inspired your own, have you read this book? And what are your views on its thoughts on agriculture? Has it changed your views on agriculture?
DK: Well, he was wrong, so it hasn’t really changed my views on science, but I have that book and it’s gorgeous. I actually have several copies printed on blue ink, on blue paper. It’s such a yearning prayer for something, for truth to resolve itself in some way that people can understand, he just wants there to be a way forward, he wants to help solve things, or something, and it’s really beautiful, especially in that sort of flowerly, Edwardian English that I like.

LMM: The band is also doing the Playground Weekender festival in Feb. Do you have a preference when it comes to your own headlining show versus festivals?
DK: I think it’s very different experiences. All our own headlining shows tend to be more intimate and connected, and the larger shows, well, it’s much more like the difference between swimming in a swimming pool and swimming in the ocean.

LMM: You seem to be the go-to guy when it comes to standing up against internet middlemen and free flow of information and all that. Which, considering the viral aspect of your success, is completely understandable. Do you think your views would be the same if you HADN’T had that success with the Youtube video?
DK: I tend to be a person who can’t shut his mouth, so I have a hard time not saying what I think. I imagine that my views on internet policy and law and policy in general, they feel like me, so I can’t imagine that I would feel all that differently if we had been really successful on the radio instead of the internet. I dunno.

LMM: So, for example, if you had plugged away for ages getting heaps of radio airplay, and you saw other bands getting a much better result through the internet, you would feel the same way?
DK: We’ve been doing this for a long time-

LMM: Not to say of course that you guys haven’t worked hard…
DK: Oh no, I’m not being defensive, but I think on the contrary: I think radio success usually happens overnight, a label gets really excited about a song and catches fire on radio stations and suddenly a band is successful overnight. One of the wonderful things about the internet is that actually no matter how huge something gets, or how viral something is, or how fast it all feels, it really isn’t. The things sort of keep tumbling through space in what I really think is a more natural human way, your’e playing all these shows in Europe we’ve had these great crowds and I don’t think even three years ago when the treadmill thing was at its height, it would’ve been as good as good as this because other things have tumbled through in the meantime.

And the treadmill video is still new to somebody today, like, it’s crazy how many people I meet who are like ‘I just learned about that last week’, because people sort of come to it in their own time.

But back to your original question, I grew up in D.C. listening to very political punk rock and a very connected and collaborative open music scene, where the fans were expected to be engaged and involved. And there were always politics involved in the music. While I don’t see myself as entirely in that tradition — I’m not singing about policy change — I do feel like, I can’t imagine shutting my mouth because I thought my fans would want me to shut up and sing, kinda thing.

There’s this school of thought that if you’re a singer you shouldn’t endanger your career by having an opinion. I can’t imagine feeling better about somebody who wanted to be wishy-washy. I much prefer the person who I disagree with but who cares than somebody who just doesn’t care at all.

LMM: And what can your fans expect from your live shows this coming tour?
DK: Our live shows tend to be pretty collaborative. We really need to mesh with our audience and our fans are really good at getting that. Dan the other day, out of hte blue said ‘I think our show is sort of a big, solid but exciting cow,’ and I was like ‘What, dude?’ and he was like ‘it’s a cow.’ And I said ‘I think it’s more of a dragon,’ so it’s somewhere between a cow and a dragon.

LMM: Um, ookay. Cool. Do you have a favourite city to visit in Australia at all?
DK: Ahh, last time we were there , the best night I had was in Melbourne, but we were only there for about ten days, so it would be cruel to judge it on that.

LMM: Fair enough. Have you or any band members considered insuring your hips to protect the potential dance moves of future shows?
DK: You know, I haven’t, but it’s not a bad idea. Maybe it’s the golden parachute, when you finally have to jump ship out of the music industry and become a human again and get a hip replacement and get insurance.

LMM: Looking forward to any other acts at Playground Weekender?
DK: Obviously Bjorn Again, I mean, come on who doesn’t wanna see them? But I’m also excited to see Polyphonic Spree and…who else is playing?

LMM: Excellent. It looks like we’re actually out of time, thanks for the chat Damian. I’ll let you get some sleep, seeings as it’s about 2am over there.
DK: Thanks very much. See ya.