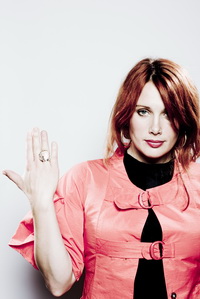 The girl can’t help it. She’s surprised and excited and confused. She’s asking questions, making plans and speaking out. Clare Bowditch is just being Clare Bowditch.

“I really love the idea of his stories living on. It’s great to be able to do a tribute with someone who is very much alive and there! You see what’s happening in the culture at the moment with Michael Jackson – I think that’s too late to celebrate someone. My theory is if you love someone, do your best to celebrate them while they’re alive and can enjoy it.”

Clare Bowditch is talking about legendary Indigenous singer/songwriter/storyteller Kev Carmody. And she wants you to know about it. On August 1st Bowditch will take to the stage with a swag of other artists including Paul Kelly, Missy Higgins, John Butler, Bernard Fanning and the Drones for Cannot Buy My Soul – a tribute to Carmody and the culmination of the Queensland Music Festival.

“Paul Kelly called a whole bunch of us and said do you want to do a song by my mate, Kev Carmody? Of course he’s the one who wrote From Little Things Big Things Grow with Paul. He kind of introduced us to Kev’s back catalogue. We all got to choose a song and it went so well that there was a show organised for the Sydney Festival and it’s now going to be toured for the Queensland Festival as well. We’re going to have a great time getting together to pay homage to one of Australia’s great story tellers. It wasn’t until Paul re-introduced me to the back catalogue and I kinda went, ‘Aw shit, where was I?’ I was really aware of Ruby Hunter and Archie Roach, who are also incredible story tellers from an indigenous point of view, but I’d never seen Kev play live and I didn’t know a lot about him. It’s only in the last couple of years that I’ve come across him and become incredibly fond of him. He’s a great human being, he’s a great storyteller.”

Chances are Bowditch is not the only one who has somehow missed out on the originality and power of Carmody’s extensive repertoire. However, enlisting the who’s who of the Australian music scene is sure to draw a crowd and introduce a whole new audience to the talented troubadour.

“Yeah I think that’s the point. We just get excited about supporting Kev and making sure that he’s not one of those Australian songwriters whose songs never get heard by a large audience.”

Speaking of audiences, Bowditch and her Feeding Set are preparing to introduce their new musical baby to eager crowds around the country, and indeed, the world. The band has been holed up in a garden shed in Melbourne recording tracks for their fourth LP. They spent a chunk of last year in Berlin – which Bowditch describes as having ‘a pretty intense edge’- soaking up the vibe, touring with Gotye and writing music. She sounds surprised about what the band created.

“I am! I’m really surprised but I think also the creative mind and our intuitive mind and our subconscious mind is a really interesting thing and I mean, I knew I was drawn to Berlin, I knew that something about being there would unleash a new side to my song writing and in fact it has. So that’s what’s happened but what do I with it? This time the old Clare Bowditch songs – the more folk inspired ones – have kept coming but next to them is this odd batch of electro pop songs. It’s just been a real challenge. They’re all about questioning the world, being a woman, growing up – all of those kinds of things – they’re all the same themes but they sound so different. To be honest I’m spending a lot of time trying to work out how to communicate that in the best way because there are songs that are that Casio style kind of song which kind of took over when we were in Berlin. The songs of that style and that level of tongue-in-cheek just kept coming and coming and coming. So I haven’t worked out how to reconcile that with the Clare Bowditch that everyone else is more familiar with.”

Is she daunted by the task of getting the record in order and exposing it for the first time?

“Not really because that’s where it gets interesting. Metaphorically that’s when the baby’s born and you get to walk around in the world with it and say, ‘Hey, look at my new thing!’ Not that babies are commodities to go around and ask what other people think of them! But new songs present a new opportunity to speak about something that’s important. It’s always terrifying but we’ve been blessed with the kind of audiences who bother to be involved and we encourage that. I want that! That’s what’s interesting for me. I think creating art is always an act of courage. I recognise that in other people. With myself, the question really is, what else would I do? This is what I believe I was made to do and I just keep doing it.”

When Bowditch speaks, you get the idea that she’s struggling to stop the ideas from pouring out of her mouth. This is not a woman content to watch life from the sidelines but rather one who thrives on engaging with art forms, issues and emotions.

“When I say I’m doing what I was born to do, I don’t mean there’s anything spiritual and mystical about it. It just means that I was born with a certain personality that means I’m always questioning everything and I need to find ways to express that usefully so music is one of them. I have been writing a script. I have been writing a book for a while. I’ve always got those things on the boil – they’re not really at the stage where I can talk about them in any lucid way. I’ve been hosting some documentaries for friends and that kind of stuff. I just did some training with Al Gore for the Climate Project and I’m also feeling pretty strongly about this new set of laws that look likely to ban home births in Australia. Therese Rein, (Prime Minister) Rudd’s wife, has been quoted as saying, ‘When I gave birth I had a choice and a voice’ and I think that’s an absolutely perfect slogan. There’s nothing radical about wanting to give birth at home. A third of people in Holland still do it and my mum has 11 that were all born at home and it’s quite a normal choice. I guess in my position, that’s what I have the opportunity to do, people ask my opinion and I can tell them.”

Clare Bowditch will pay tribute to Kev Carmody at Cannot Buy My Soul on August 1st 2009 at Brisbane’s Riverstage.

Clare Bowditch and the Feeding Set will be back in Brisbane on September 26th 2009 for Sounds of Spring.