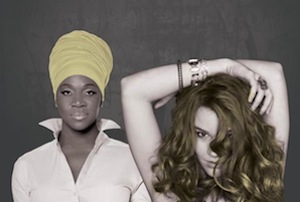 Bluesfest Touring is continuing the momentum only days after announcing Beth Hart’s Bluesfest sideshows with a rare musical double bill with two of the leading ladies of soul… the revitalized and inspirational India.Arie will be uniting with the rebellious and captivating Joss Stone in a series of special shows in Brisbane, Sydney and Melbourne.

It has been 8 years since Denver-born India.Arie last graced our Australia shores. She has been nominated for a massive 21 Grammy Awards, won four, and has sold over 10 million albums. From the moment that her very first single ‘Video’, and her multi–platinum debut album Acoustic Soul were released in 2001, India’s music established an extraordinary bond of trust, affection and communication with lovers of music throughout the world.

Joss Stone has won a Grammy Award and two BRIT Awards; and her anthemic hit songs like ‘Super Duper Love’, ‘You Had Me’, ‘Dirty Man’, ‘Fell In Love With A Boy’, ‘Don’t Cha Wanna Ride’, ‘Right To Be Wrong’ and ‘Tell Me ‘Bout It’ have elevated Joss Stone to global stardom and she is still only 26 years old !

Visit www.bluesfesttouring.com.au for all details and tickets.