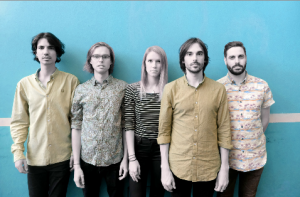 With all the right pop sensibilities for success, the fivesome release their third single off the EP, Daisy Eyes which lures the listener into a blissed-out wonderland of swirling hooks, impossibly catchy drum lines and psychedelic harmonies. Daisy Eyes is a contagious coupling between the sunny dream-pop influences of the 50’s and 60’s with a shimmering contemporary perspective. The nostalgic undertones balance out this upbeat offering, leaving the listener with a complex tune that will resonate with the inner romantic.

The Sydney outfit have been setting the stage for the release of their debut EP, Illumina by building momentum from the success of their first two singles, as well as two East Coast tours which saw packed out rooms and rave reviews.

She was touted as the perfect dreamy opener, receiving international buzz, comparisons to the likes of Beach House and Grizzly Bear and racking up over 20,000 Soundcloud spins. Their second single, Hold This Tight showed a more layered, complex offering, receiving solid National airplay on Triple J and DIG radio as well as community radio support and nods of approval from the discerning ears of bloggers and journalists worldwide.

“If you ever wondered what Britpop, surf rock, and experimental electronic sounded like when combined into one beautifully produced package, then this is a track you’ve got to pay attention to.” – Hilly Dilly

DAISY EYES IS OFF ILLUMINA
AVAILABLE DIGITALLY 16TH MAY 2014