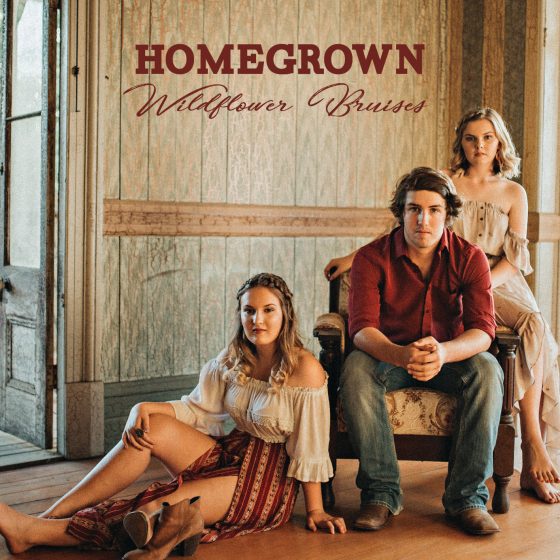 2018 heralds the beginning of exciting times for family band ‘Homegrown’, with the release of their 6 track EP ‘Wildflower Bruises’. Katelyn, Liam and Kasey (20, 18 and 15 years old) are indeed young, but musically they have maturity far beyond what the years suggest. After a childhood of singing together, a 2016 5-track release, touring and wowing audiences Australia wide throughout 2017, they are back with a stellar EP release.

Each of the 6 tracks have been co-written by the group with various artists, and include the hauntingly beautiful title track ‘Wildflower Bruises’, the sassy ‘People Change’ – a commentary on social media, the poignant ode to their Nana, ‘My Darling Vera’ and the ‘Steelers Wheel’ vibe of “I’m Gonna Leave it There”, where brother Liam takes care of the lead singing.

This is truly an EP of collaboration – vocally Katelyn, Kasey and Liam switch roles throughout, and the harmonies between the three siblings will leave you speechless.

‘Wildflower Bruises’ is Homegrown’s second release, following their self-titled debut in 2016. This EP however will cement the band as new stars of the Australian music scene – stamping their mark, with their original folk/country sound – where the emphasis is on their vocal unity, honest song writing, and down to earth values.

The first single, Wildflower Bruises was written by Kasey and Liam O’Donoghue (with Zoey Mills and Peta Cherae Peters). Wildflower Bruises tells the story of a young boy and girl, whose love can not sustain his jealousy or insecure ways. “He picked the petals and crushed the stems, ’til there was nothing left of them”. The heartfelt song is produced by Simon Johnson with delicacy and class, with a focus on the captivating harmonies of this 3 member family band.