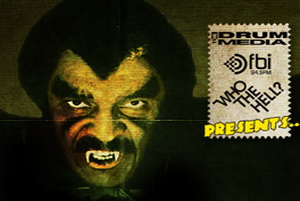 Burlesque dancers, sword-swallowing freaks, fire-breathing entertainers and a human vending machine – there was all this and a bunch of coffins, jack-o-lanterns, cobwebs, skulls, fake axes and faux blood from similarly false severed limbs at the Halloween Monster Mash on Halloween Eve at the Metro Theatre. The event was a surreal presentation that was not strictly a concert, kind of like a mini-festival but with better costumes and greater audience participation.

Arriving at 8:30pm we would see the Metro transformed into a black, Transylvania-style fortress where Magnetic Heads, a six-piece pop/rock outfit would warm the crowd. The five boys were in tight; little black dresses while keyboardist Lucy Kaldor was in white shirt, black pants and skinny tie. It meant the group looked like they could be auditioning for the Rocky Horror Picture Show when they were in fact channeling Robert Palmer’s “Simply Irresistible” clip. They performed single, “Blind” plus other tracks which featured jangly guitars and one with a catchy 60s surf-style riff. Jonathon Miller (AKA Des Miller) endeared us with pithy observations about not kissing mics while wearing lipstick and avoiding cameramen upskirting you; so basically it was all nice legs and equally sweet pop.

The Who The Hell DJs would spin some tracks in the main theatre but The Lair would provide an alternative between-set spot boasting things like: apple-bopping competitions, Queen of Voodoo and wacky Simon and Garfunkel impersonators. Next to the bar was a human vending machine where some poor person in a scream mask danced, shook hands and dispensed rocky road to bemused punters. For having the enthusiasm and patience to stay locked in the tiny glass receptacle (definitely not for the claustrophobic) for the bulk of the night I have to agree with the lady who said, “The guy’s a legend!” because indeed he/she was.

The next band received massive brownie points for going to the most trouble with their costumes. Guineafowl boasted four teenage mutant ninja turtles plus sensei, Splinter, and The Bride (AKA Uma Thurman in Kill Bill). No we’re not sure how that last one was connected to the first two, nor do we know whose idea it was to wear such difficult outfits (blindfolds, mock tortoise shells) while performing AND dancing. The haphazard costumes worked very much in their favour though, as the group interacted well with the crowd, cracking jokes and feeding off the mutual enthusiasm and affection in the air.

They started with a cover of Carl Douglas’ “Kung Fu Fighting” and this was a great sweetener that summed up the general mood of frivolity. The crowd lapped it up and would continue bopping along to the danceworthy and harmonious indie pop of their original songs: “In Our Circles,” “Little Fingers’ and “Botanist”. In short, the group proved a golden sounding board on a ghostly night for an all-too-short half hour set.

The Laurels were up next with their shoegaze-meets-psychedelic rock punch and attire that included a Viking helmet and leopard print tights. The quartet did a ghoul rock (with an emphasis on the later) version of Screamin’ Jay Hawkins’ “I Put A Spell On You”. But it was not all covers, as their blend of My Bloody Valentine noise crossed with frantic rock cacophonies continued into “Turn On Your Mind” and “Merry Go Round,” with the group exorcising a few demons with brute force and red-hot pokers AKA axes.

Count Dracula was next to put in an appearance with his band, Last Dinosaurs. Starting with a cover of Mercy Arms’ “Kept Low” made for an unexpected yet stellar curveball that even saw Guineafowl dancing like a crazed kid in the crowd. They played their first ever single – a Red Riders-meets-The Strokes romp, “As Far As You’re Concerned,” a cut of indie rock that borrowed a few things from Gossip’s “Pop Goes The World,” and single, “Honolulu” which featured much finger-pointing and jest in the crowd due to the Ramones-like heys in the chorus. A smile did not leave drummer, Dan Koyama’s face and a few punters left feeling similarly joyous after witnessing their tight set of infectious pop/rock.

Spod came on stage and asked about smoke machines before whipping the audience into a frenzy by getting them to put their hands up and dance like the group’s three female backing dancers. The song shared a few things in common with 28 Days’ “Rip It Up” and could’ve been lost in an avalanche of testosterone were it not for Spod tossing about coloured confetti and prettying up the place with a dash of sparkle. Like bedazzling for the air with The Flaming Lips’ Wayne Coyne as inspiration it was oh so shiny!

Spod would don a feline mask for “Cats!” an intergalactic space walk, while “Afterparty” packed a punch that could’ve made it a number by The Philly Jays thanks to some screaming banshee vocals and dirty guitar riffs. “Bette Midler” had some crazy synth and was an instrumental feedback frenzy, “Make You Sweat” had 80s dance stamped all over it and “2131 Ride Wit’ Me” was a standard rock duet. A truly schizophrenic set that straddled genres like dance, hip-hop, rock and more with plenty of visual bells and whistles, the chaotic mess of styles proved a solid diversion.

There was some more music by the Who The Hell DJs (all cleverly disguised as famous American politicians) but they received perhaps the best reaction of the night when they played Queen’s “Bohemian Rhapsody” complete with some interpretative dance moves from the DJs themselves. Next it was time for the awards for best dressed (Female: Virgin Suicides group and Male: Hunter S. Thompson) and most effort (F: Frog Princess and M: Willy Wonka). At the dark of 12:30am it was time for Dappled Cities but unfortunately some of the already smallish crowd left so that only the staunchest devotees braved this next instalment of the date with the night.

The four boys were dressed in black, green and gold spandex or as the members of the Jamaican bobsled team from the film Cool Runnings while bassist, Alex Moore, was dressed as their manager, the late and great comedian, John Candy. They played an abridged set for about an hour that focused on their most recent album, “Zounds” in what was perhaps the final outing of the record.

They started by covering the Cool Runnings theme, “I Can See Clearly Now” with guitarist, Dave Rennick on lead vocals. “Vision Bell” saw the group play their catchy art rock that washed over the crowd as if the confetti from earlier was being tossed around once more. “The Price” meanwhile, would be sans the infamous light suits and in spite of this and a few fluffed lines still had the kids lapping things up.

“Wooden Ships” was moody indie rock with some harmonies that left a little to be desired but there was a palpable sense of silliness in the air, particularly during “Fire Fire Fire”. Some punters would dance as they never had before while others staged an impromptu bowling match with foam skull props à la The Simpsons Treehouse of Horror.

“Holy Chord” started life as an a capella number before building into a rocking little ditty while the remainder of the set featured: “Cream,” “Apart” and “The Night Is Young At Heart”. And while the evening was no longer ripe at this point, those fortunate enough to have been there had been treated to a veritable kaleidoscope of musical genres, carefully constructed decorations and costumes. It was a great way to celebrate Halloween with nary an egging or troublesome child in sight; rather it was a bunch of big kids at play on a Saturday night.