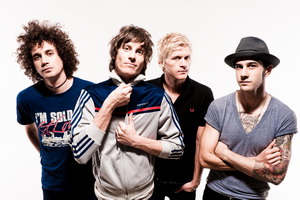 Just a few weeks ago GYROSCOPE announced their first hometown show for 2012. Now, with great regret the band must postpone THE BENEFIT FOR DANA VULIN due to guitarist Zoran Trivic’s involvement in a motorcycle accident.

ZORAN TRIVIC was struck by a vehicle when riding his motorcycle in Perth last Monday and has sustained two badly broken legs. Although he is expected to make a full and complete recovery, the next three to four months will see Trivic undergoing several operations and undertaking full-time rehabilitation in order to get back on his feet.

GYROSCOPE are determined to make THE BENEFIT FOR DANA one memorable night, so have postponed it back to SATURDAY SEPTEMBER 22. The show will remain at THE ROSEMOUNT HOTEL and excellent local supports THE SCOTCH OF ST.JAMES and BOSTON & CHEVY have kindly agreed to reschedule also. Tickets already purchased for the benefit will be valid for the new date. Any punters who wish to seek a refund can do so by contacting Oztix: oztix.com.au / 1300 762 545 .

Perth local, 26 year old DANA VULIN fell victim to a horrendous crime in her hometown of Rivervale, Perth two months ago. An intruder broke into her home, confronting her and dousing her body in methylated spirits, and setting her alight. This premeditated attack left Dana with burns to 60% of her body. THE BENEFIT SHOW FOR DANA will raise much-needed funds to aid Dana and her family with the expenses of medical treatment, legal fees and rehabilitation costs.

In the meantime, GYROSCOPE are also calling for donations to assist Dana. These can be made by visiting any Westpac branch with the account details, or via direct debit to: WESTPAC BANK / BSB 036000 / Account: 939549 / Account name: FOUNDATION FOR DANA VULIN. And snap up your tickets, take the next couple of months to get very excited and witness Zoran’s triumphant return to the stage in support of a very worthy cause.

GYROSCOPE
THE BENEFIT SHOW FOR DANA
TICKETS ON SALE NOW
With The Scotch of St.James & Boston and Chevy