Guards of May are keeping the momentum rolling from their previous single release in late 2013 with a brand new single and East Coast tour in April. Recorded predominantly with Matt Bartlem and also with Tyse Lee at Loose Stones Records, the followup to their wildly successful single Numbers, Arcadia, takes things to the next level. The single is out digitally on iTunes, Spotify, Bandcamp and more on Friday March 28, just ahead of their first tour date.

The track, Arcadia, is the followup to Numbers – which was added to rotation on Triple M’s Rock at Nights and Distortion shows, as well as being played on The Aussie Alternative Radio show and on US radio shows Rock Radio, Neueregelradio and radiohhh.com. The radio play translated into awesome shows on the previous tour, cementing Guards of May’s position as one to watch in the Australian rock music scene.

Arcadia is a massive rollercoaster ride of a track – smacking listeners across the face from the get-go with what is probably Guards of May’s hardest riff to date, then taking it down to a marching rhythm and melodies for the verse, then taking it back up to soaring highs for the chorus. Richie Harvey’s voice stands tall and proud in this track, from fragile falsetto to laying down a massive chorus.

Bass Player Jimmy Harden is excited for the tour and release. “This one’s been a little while in the making. Arcadia is a track we are fiercely proud of. We’ve been saving this one for now – I can’t wait to play it for people everywhere.”

Guards of May are: Richo Harvey – Vocals, James Harden – Bass Guitar, Levi Russell – Drums, Damien Salomon – Guitar and Keita Neralic – Guitar – and they have shared the stage with some of the cream of Australian rock; Dead Letter Circus, Grinspoon, Spiderbait, Breaking Orbit, Helm, Electric Horse and Strangers in venues all over the country.

Arcadia is out Friday March 28 digitally in all good online music stores and ticket information for the tour can be found at http://www.guardsofmay.com. 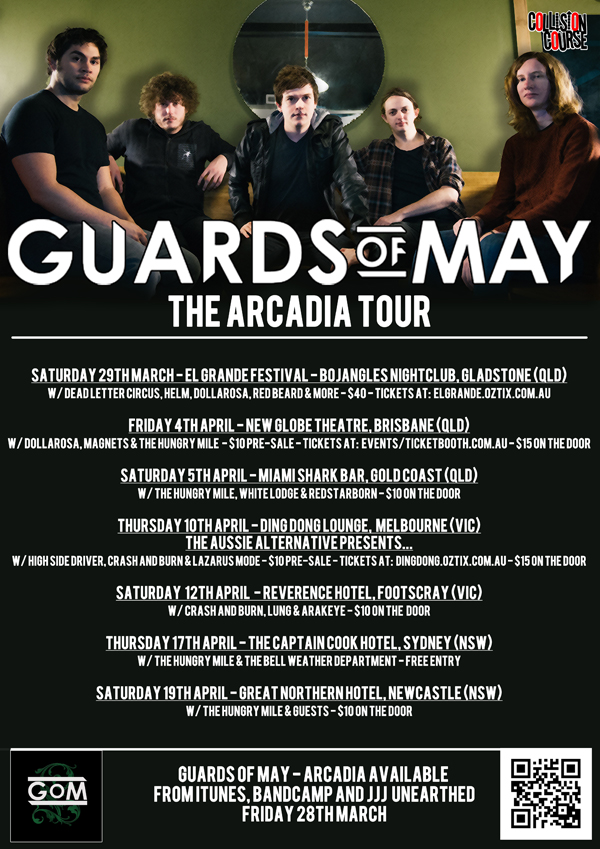