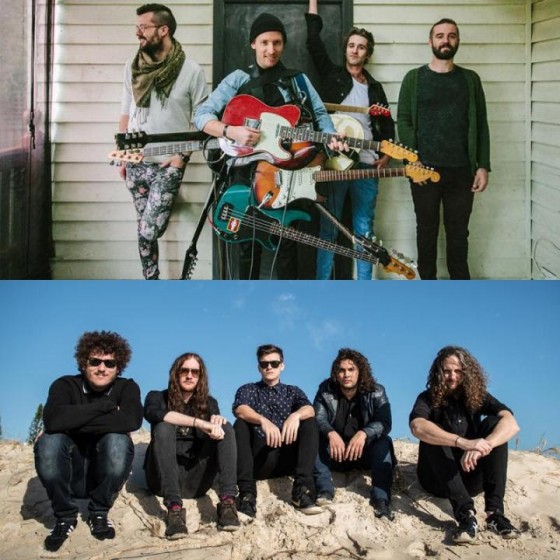 August 2015 will see two of Australia’s most promising rock/prog acts travel and perform together through Australia over 4 weekends, blazing their trail on a joint album release tour, presented by Killyourstereo.com.

Gatherer (Melbourne) and Guards of May (Brisbane) have joined forces to spread the word about their respective albums, both up for release in August. Gatherer’s ‘Heavy Hail’ drops first on August 7 and Guards of May’s ‘Future Eyes’ will see light of day on August 14, with the tour beginning on August 15.

The tour hits Brisbane at The Zoo 15th August, Sydney at the Bald Faced Stag 21st August, Adelaide at Enigma Bar August 29th and Melbourne at The Toff in Town September 5th. They are bringing a bunch of pals along for the ride too – including Mofoisdead, FreeThought, Ten Thousand, Enter Reality, Glass Earth (a brand new band consisting of members of Sydonia, Rook and Sleep Parade!), Bear The Mammoth, Colibrium, Favour the Brave and Submerge.

Both bands have had a stellar start to 2015 and it seems, were always on a path to performing together. Guards of May took out the Heavy Music award at the Queensland Music Awards in March with their track Numbers and have supported Shihad and Dead Letter Circus this year, while Gatherer have been spending their nights supporting The Getaway Plan around the country. Two stars on the rise are better than one!

There has only been universal praise for the two bands’ albums and new music. Dom Alessio states that “If you’re a fan of Dead Letter Circus & Karnivool you’ll find a lot to like in this song” about Guards of May’s ‘The Observer’ and Muzic.net.nz proclaiming Gatherer’s ‘Killer’ “an ambient dark delight but still encompassing beauty and depth while holding on to the originality and weirdly wonderful elements.”

Future Eyes, Guards of May’s full-length debut album, is out Friday August 14 through MGM Distribution for purchase in-store at JB Hi-Fi and all good retailers, as well as iTunes, Spotify and all other online stores. More information can be found at http://www.guardsofmay.com.