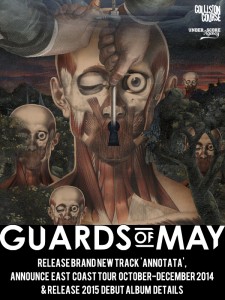 Brisbane’s busiest alternative rock act, Guards of May, have been punching out their debut album in the Loose Stones studio on the Gold Coast. Now they are giving people the first look and listen of the new material with a single entitled ANNOTATA and are touring Australia from October-December with a whole heap of their pals, alongside Jericco, Circles, Caligula’s Horse, Sydonia, Young Lions and more.

The as-yet untitled album will be released in the first half of 2015 and marks a major step forward in the band’s sound and feel – into heavier territory, into more complex twists and turns and certainly into new sonic territory. The decision to make the album was one that vulcanised the band into a solid creative unit and they have emerged on the other side a rock-solid force to be reckoned with.

Annotata is the first cut from it and shows a demonstrable heaviness and leap forward for the quintet. The song still features soaring vocals and gigantic guitar sounds, but the new direction takes the listener through a genre journey, light to shade, heavy and soft and everything in between. Catchy and Complex CAN exist in the same space.

Guards of May are now embarking on what is their biggest and most exciting tour to date, taking the stage with Jericco, Circles, Caligula’s Horse, Sydonia, Young Lions, Bound For Ruin, Life Pilot, Let the Number be X and Neotokyo to name a few – at some of the best venues in the country – Ding Dong Lounge, Factory Theatre (Factory Floor), The Coolangatta Hotel and The Brightside.

In just over 2 years, Guards of May have completed numerous East Coast tours and have shared the stage with some of the cream of Australian rock; Grinspoon, Spiderbait, Dead Letter Circus, Sydonia, Helm, Like Thieves and more. Their mix of heavy progressive rock and melodic, dynamically interesting songs sees them turning heads and winning hearts at all turns. They have seen success in other areas too – the film clip for their debut single “Control” was nominated for the 2012 Australian Film Editor’s Guild Autodesk Award, along with the likes of Angus and Julia Stone, Guy Sebastian and Ball Park Music.

Annotata is out Friday October 17 for purchase in iTunes and all other online stores and all ticket information can be found at http://www.guardsofmay.com.

Friday, 7 November 2014 – Gold Coast, QLD
The Coolangatta Hotel
w/ Caligula’s Horse, Opus of a Machine, The Round Persuasion
$10 pre-sale, $15 on the door – Tickets from OZTIX