The hugely successful first leg of the tour in March, saw the band playing at “Sold-Out” venues like The Enmore Theatre and HiFi Bar in Melbourne to a very energetic crowds. Grinspoon are looking forward to the opportunity to engage with their regional fans with their amazing show and unique support line-up.

Grinspoon’s sixth studio album Six To Midnight has received a tremendous response so far, debuting at #4 in the ARIA charts and winning mountains of praise from fans and reviewers alike. The first two singles Comeback and Summer, and the latest single Premonitions have received huge reactions, gaining high rotation on most major TV & radio stations.

Legendary US producer Rick Will (Johnny Cash, No Doubt, Nine In Nails) was behind the albums’ production & mixing duties, and has delivered one of Grinspoon’s finest records to date. The band returned to their spiritual home town of Byron Bay to record the album, which helped them capture their affinity for a good live hard rock record, something the band really wanted to achieve.

Grinspoon’s return to the live last year saw them play to a wild and overflowing main stage at the Splendour In The Grass festival, which went down as one of the band’s most memorable gigs to date. A sold out launch tour on the east coast in September soon followed, with Six To Midnight released at the same time, and then a huge national tour in early 2010 saw the band take in some of the biggest venues in capital cities across the country. Their loyal army of fans received their first taste of the record in a live setting, and judging by the reaction so far, it’s one of their best yet.

In celebration of all these great things, Grinspoon have decided to do what they do best and hit the road once again, this time taking in regional venues across New South Wales, Victoria, Tasmania & South Australia. Come and see why Grinspoon have been proclaimed one of Australia’s premier live acts, time and time again. 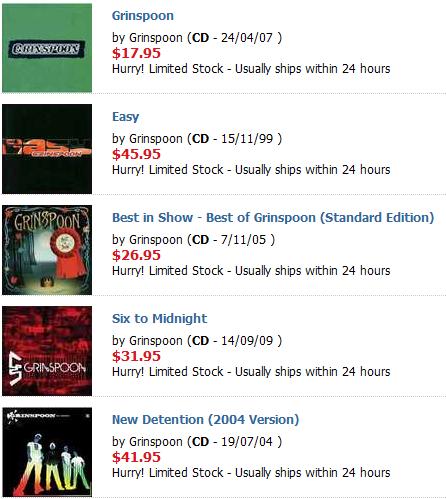