requisite number of peak, troughs and pauses occurring at the appropriate moment. The underlying hooks make a pleasant half-hour diversion, but the crowd’s polite indifference is ample proof that Tim & Jean are offering nothing ground-breaking yet.

Goldfrapp emerge to an abbreviated version of Voicething piped across the PA. It’s a beautiful disappointment: the interplay of pulsing vocals and reverberating synths caressing the ears surely would have been magnitudes more affecting performed live.

The band takes a few songs to find its feet. It’s not that they sound bad. In fact, the Tivoli has, possibly, never sounded so good: Crystalline Green’s swagger and strut is echoingly gorgeous; Dreaming simply takes off on that first explosive breath on the chorus; You Never Know is all spasmodic clockwork and dramatic synth brushstrokes.

But, initially, the connection isn’t quite there. Maybe it’s the jetlag Alison Goldfrapp briefly touches on at the conclusion of one tune.

Hints of a breakthrough come with the glossy beats of Head First’s title track, but it’s the velvety croon of Supernature’s Number 1 that finally gets the crowd going as fingers and fists are joyously raised to the skies on every repetition of the chorus.

A fourtet of cuts from Head First follow: Alive and then Rocket burst forth in a pure distillation of ’80s glam-disco fun that just invites comparison to Olivia Newton-John, ABBA and Van Haylen’s trademark synths. Most are too busy dancing to pause for analysis. Believer is gentler effort, while Shiny & Warm’s off-beat percussion and quirky blips warp deliciously around Goldfrapp’s purr.

Then the pay-off for hearing Head First almost in its entirety: a slew of hits at the very end. A teasing rendition of Train; Ride A White Horse with a long outro sequence that fuses subtle variations of keytar and Goldfrapp’s luscious wailing around the song’s robotic beat; then the taunting near-rock catchiness of Ooh La La concludes the main set.

Naturally, there’s more. The spine-shivering operatic highs of Utopia and the languorous sleaze of Black Cherry provide a few moments of calm before the band works the front rows into a mini-frenzy with the ever-smashing Strict Machine. 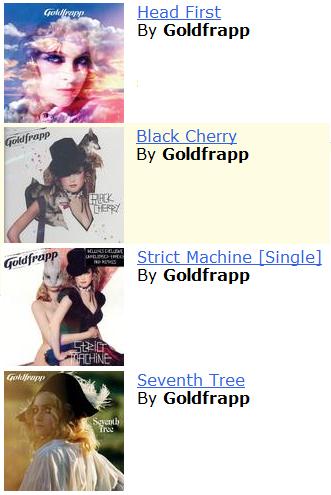 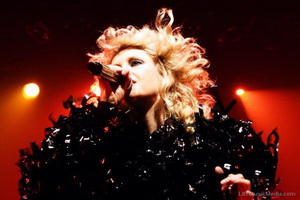