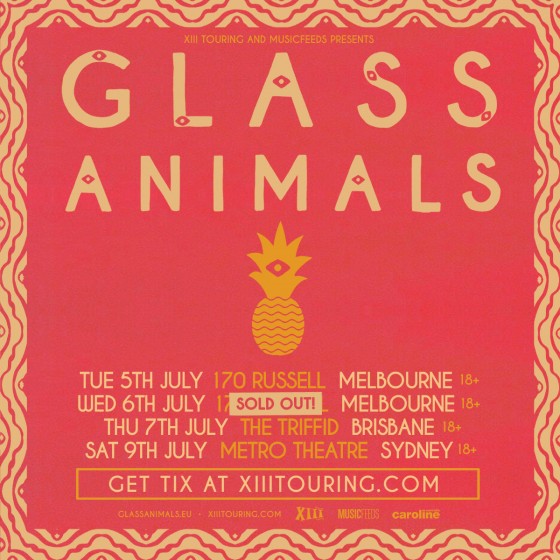 Glass Animals are pleased to announce their return to Australia in July.

The British four piece are made up of childhood friends: Dave Bayley, Drew MacFarlane, Edmund Irwin-Singer and Joe Seaward.

Their debut album ZABA was released in June 2014 through Caroline Australia / Wolftone, produced by frontman Dave Bayley and executively produced by Paul Epworth.

ZABA features the breakthrough single ‘Gooey,’ certified GOLD status in Australia (their first anywhere in the world.) The track crashed into Triple J’s Hottest 100 at #12- the highest placed UK act for 2014.

Their live story continued to explode in 2015, playing to massive crowds at festivals all over the world, including 25,000 people at Outside Lands and sold out Central Park Summer Stage as well as Reading & Leeds and Glastonbury.

Having been streamed over 20 million times to date in Australia alone, it is time for Glass Animals to return to Australian shores to unleash their unique brand of trippy synths, rhythmic guitars and bass onto the masses.