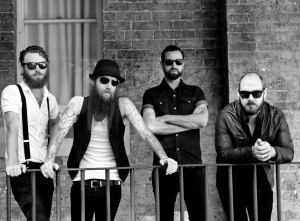 Ready to mount their assault against the humdrum, Gay Paris announce the release of their incendiary forthcoming album, THE LAST GOOD PARTY, on April 19, produced and recorded in Australia with acclaimed Californian producer, Sam Pura. As if this weren’t enough of an advent, stand to attention as the magnificent purveyors of revelry and thrills bestow their daring feats of musical prowess upon the people during national tour throughout April, May and June. The deliverance now continues over ADDITIONAL DATES within the city walls of Newcastle, Bendigo, Wollongong, Canberra and Port Macquarie.

After the release of their first official single The Demarcation of Joseph Hollybone and national tour with sold out shows in late 2012, Gay Paris have returned for the good of the people, to light the way to a departure from the ordinary. They have heard your clamouring, and are poised to quench your thirst with reckless abandon. They have practiced corruption – they have mastered it. They have crafted an ark of filth, seduction and raunch to show you the way. Now, their one request is that that you join them in support their righteous crusade – in delivering the promise of THE LAST GOOD PARTY. You asked for salvation, and you shall receive.

Spurred on by apocalyptic new album THE LAST GOOD PARTY, the merry-makers hit the open roads of Australia on a 35 date national tour, commencing April 18.