With little requirement for much control, the friendly crowd seemed slightly at odds with the size of the police force throughout the weekend. Officers walking sniffer dogs through festival grounds among the punters simply enjoying their lunch was an unusual sight. Though despite their numbers and high visibility, police were friendly and relaxed. Security were equally laid back in general.

Held at Del Rio Riverside Resort, in Wisemans Ferry on the shores of the Hawkesbury River, the location is exquisite. Not the easiest to get to, I would advise against going by public transport, given some confusion regarding the coaches travelling from Central and Windsor Stations. If you can’t avoid using public transport, plan early and book in advance. It’s the kind of setup where if you don’t book the shuttle there may not be anyone on it so it may not run.

If you’ve ever been to a festival and thought “that was awesome, but I want more DJs,” then PW is for you. Four of the six stages were mostly dedicated to DJs, in response to previous years’ punters requests. At any given time, Club Tropicana was constantly pumping and clearly party central. With quality DJs, pools and bar, those bent on solid partying action had all they needed. The nearby Sounds Bigtop was pure dance-spot, while SoCo Carnival provided a more relaxed mood with ambient decorations by the river side.

The Filth Stage was a great showcase for local up and coming bands, generally of the heavier variety. Punters seemed shy to venture too close to the stage for the most part, with many preferring to observe from the nearby sheltered area in the sweltering conditions. The Jezabels, Regular John and Lost Valentinos thankfully quashed that trend and were among crowd favourites.

The size of the site is small enough that no traverse between key locations seems too long, and yet the smaller stages don’t get drowned out by the main stage blare. Bars and food stalls were situated close to all stages.

One of the great things about PW that few other festival’s can boast is the swimming. With the sun relentlessly out in force across the weekend, the pool was full and the surrounding vibe was nothing short of awesome. The wading pool was quite popular too.

The rules outside the pool said it all and unfortunately I suspect they were not written without precedence: ‘No Diving, No bombing, No pissing, No Shitting, No Fucking’. Sure enough, the pool did seem to exhibit a strange green tinge by Friday afternoon. A dip in the Hawkesbury was a more relaxing alternative to beating the heat without leaving festival grounds, though perhaps no cleaner.

The most fraught crowds of the festival were not for the headliners, but those awaiting the ferries departing the resort during the day. There’s always going to be times of congestion when the only means of entry to a festival is via ferries (and the profiteering water taxis) but the crowd would have been more relaxed around the ferries had there been shade, and a schedule.

On the festival side of the river, there was no particular queue structure, so some people waited from a distance in patches of shade and rushed for the jetty in a crowd as the ferry approached. Passengers alighting the ferry were met with their entrance blocked by people desperately eager to get on, and security needed to assist people to squeeze through the crowd. Simple fences separating arrivals and departures would have worked wonders.

There was a delightful mix of the regular festival foods on offer. Stand outs included Mad Pizza, Madame Sausage, the growing popularity of Dutch poffertjes, Turkish gozlemes, chorizo and several other delicious cultural dishes. And of course the soon to be iconic “Chips on a stick.”

To music matters. Before telling you about the music across the weekend I must excuse myself from providing commentary on the DJs. As you will gather from Arfy’s photos and the following comments, we were all about the bands.

Right from the get go, UK’s The Cribs ripped onto stage with all guns blazing and delivered an energy charged rock set that wouldn’t have gone astray at the biggest of arena shows. On the other side of the spectrum, Washington put on a lovely set, her vocal performance both mesmerising and flawless. A brilliant Aussie artist who is going places fast.

Saturday’s main stage kicked off with ManChoir, perhaps setting a new benchmark for what it takes to get on to the main stage. Clad in blue singlets and armed with beers, one could be forgiven for mistaking them as road crew. Get a dozen average-looking blokes together singing covers and the results are surprisingly endearing, celebrating good lo’ larrikinism and hilarity in general. From soprano to bass, these guys could actually sing, performing great renditions of Man of Constant Sorrow, Fat Bottom Girls, and – after prepping the crowd to sing the national anthem – performed the Home and Away theme song instead. The crowd loved it.

However the moment Lupe hit the stage, any bad blood was immediately thrown out the window. Lupe effortlessly enlivened the crowd with a great hip-hop set with a rock edge, the man himself a true performer.

Polyphonic Spree were their usual crazy, happy, little bit weird selves, lots of fun. Singer Tim DeLaughter appears to be one of the happiest, flamboyant frontmen, much in the same vein as Wayne Coyne of The Flaming Lips. They covered a number of songs including Beatles’ Live and Let Die and Nirvana’s Lithium which had the general masses just loving it.

OK Go put on a solid performance with a great use of feathers, and proved much more than just a band that can make a popular video with treadmills. British Sea Power were also a highlight, exhibiting some very cool sounds and background visuals of birds in water.

Cameras, The Black Ryder, Space Invadas and even Bjorn Again all graced the main stage with invigorating sets, with perhaps Brian Jonestown Massacre – the Friday night headliner riddled by sound issues – being one performance that I feel didn’t live up to it’s hype. Joel Gion appeared absurdly smug for someone who only plays the tambourine all set.

With festival headliners Orbital scheduled to take the stage at any moment, the gathered crowd seemed curiously small. But as soon as the main lights went down and Orbital’s light display went up, hundreds of folk moved with purpose towards the stage attracted like insects, coming from all directions. The British electronic duo were met with pure adulation when they stepped on set, and they in turn entranced their audience, pumping even the curious onlookers around the outskirts of the crowd who had never even heard of them into a dancing frenzy. A fitting way to conclude the festival.

All in all, if you want a festival without all the riff-raff, you’ll love Playground Weekender. See you next year.

– The Jezabels available at iTunes

– The Polyphonic Spree available at iTunes 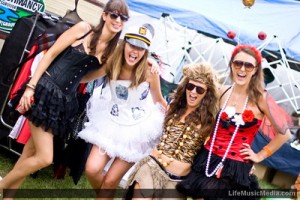