South Londoners Fat White Family have announced Splendour In The Grass sides-shows, kicking off in Sydney at Oxford Art Factory on Saturday 23rd July followed by a double header in Melbourne at Yah Yah’s on Sunday 24th July and Cherry Bar on Monday 25th July.

Fat White Family are not your usual chart-tickling troubadours. Over the last three years, they have earned a reputation as one of the most incendiary live bands on the planet. They come with a reputation, built on a wild lifestyle and onstage outrageousness.

Fat White Family recently released their sophomore album Songs For Our Mothers in January 2016. Which is the follow up to the group’s debauched garage punk debut Champagne Holocaust in 2013.

The rumours about the band may all be true: they once rode a donkey into a pub, band members have gotten naked on stage, and one time they threw a pig’s head around the crowd. Frontman, Lias Saoudi has in fact performed naked while rubbing butter over his torso. But that’s not the only reason they’re Britain’s most sensational young band.

“Fat White Family have a knack for turning questionable taste into excellent punk rock.” Rolling Stone/Hot List
“The most important rock and roll band of their generation” The Line Of Best Fit – 8.5/10
“Undeniable genius” – Mojo – 8/10 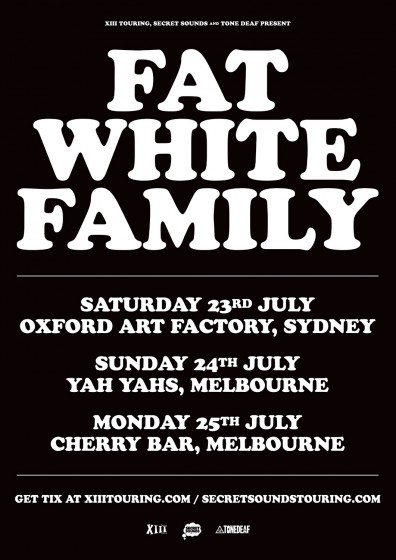