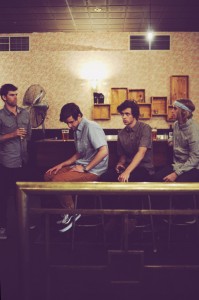 Pop open the champagne and get out the confetti, it’s time to celebrate! Once again, The Falls Music & Arts Festival has enjoyed a stellar season at the State Tourism Awards, taking out two leading categories: ‘Excellence in Sustainable Tourism’ and ‘Major Festival’s & Events’! To salute these awesome achievements they’re adding two massive names exclusively to the 2014 Marion Bay line-up!

Heading to Tassie this summer will be..

It wouldn’t be unfair to use the word ‘juggernaut’ to describe a band like The Rubens. Hailing from the small town of Menangle (population 327), these three brothers and a cousin have laid waste to the Australian music scene over the past couple of years. Initially Unearthed by triple j, it wasn’t long before The Rubens were standing on their own two feet. Their debut album has been an unmitigated success, with singles like ‘Lay It Down’ and ‘My Gun’ entering the national song consciousness quicker than you can say “hand picked Bruce Springsteen support”. Dreams really do come true, but for a band like The Rubens, the dream was really just the catalyst.

The ARIA Award winning “King of Hoku” and celebrated Aussie bluesman C.W. Stoneking will be bringing his pre-war blues, jazz and calypso tunes to the Falls stage this summer! Steeped in American sounds of the 1920s and 30s, you’d easily be mistaken for thinking Stoneking had just stepped out of a Louisiana prayer meeting or a Chicago juke joint, albeit by way of a time machine. In the 2014, hearing him talk on stage in an affected American twang does little to dispel that notion – especially with his recent release Gon’ Boogaloo which features raw gospel, ska and blues balladeers throughout. Start dusting off your Sunday best and get ready to join the chorus for a live performance like no other at Falls.

For the second year in a row, The Falls Music & Arts Festival in Marion Bay has been awarded the Tasmanian Tourism Award as the State leader in ‘Major Festivals & Events’! This category focuses on events that are large drivers of interstate tourism, that provide vast employment opportunities to locals, that bring world-class entertainment to the state, injecting significant direct and indirect expenditure into the state economy whilst supporting local tourism and community projects. The

Winning the Victorian Tourism Award for ‘Excellence In Sustainable Tourism’ for the third year in a row has seen the Lorne event inducted into the prestigious Hall of Fame! This is a huge coup for Falls as it becomes the first festival in this category to do so. To reach this milestone, they demonstrated a consistent focus on environmental and social initiatives that implement power and water saving methods, strong recycling and waste removal procedures, education and empowerment, alternate power source usage, strong emission offsetting, commitment to local community projects and an overall sustainability ethos built into the structure of their organisation.

Both events are now nominees in their respective categories at the national Australian Tourism Awards; winners will be announced early next year.

AUSTRALIAN EVENT AWARD WINNERS: BEST ACHEIVEMENTS IN SUSTAINABILITY
Falls proved yet again their strong leadership in environmental achievements by winning the Australian Event Award for ‘Best Achievements In Sustainability’! Falls has always had a robust sustainability focus that has grown each year with new initiatives. Falls is set to unleash even more innovative projects this year, the details of which will be released closer to the event! Stay tuned.

TRAVEL BOOKINGS:
Best to book your travel early while availability is high and costs are low, check out the Falls website for all of your options. Take a look at the Falls Tassie roadtrip here.

ABOUT THE FALLS MUSIC & ARTS FESTIVAL 2014:
A world-class line-up of music, comedy and arts in a relaxed festival environment. The coastal locations are beautiful and all camping is free.