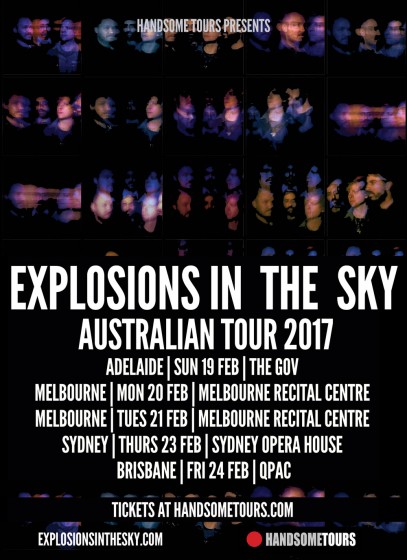 Handsome Tours are proud to announce the much anticipated return of Texan post-rock icons EXPLOSIONS IN THE SKY to Australia in February 2017. In addition to headline performances at the Sydney Opera House, Melbourne Recital Centre and Brisbane’s QPAC, the band will perform at The Gov in Adelaide on Sunday 19 February.

For over a fifteen years, Explosions in the Sky have occupied coveted space at the forefront of instrumental rock. Their vast, emotionally-charged opuses exhibit musical beauty that deftly toes the line between all-encompassing and entirely overwhelming Explosions in the Sky’s expertly presented, visually and aurally stunning live performances transport the listener to vast landscapes, on epic journeys. With just three guitars and percussion, Explosions in the Sky will conjure cacophonous, evolving walls of noise. They are truly a musical experience like no other.

2016 has seen the intrepid outfit release their seventh LP ‘The Wilderness‘, their first since 2011’s acclaimed ‘Take Care Take Care Take Care‘. With the intervening years punctuated by the release of soundtrack scores for feature films Prince Avalanche, Lone Survivor and Manglehorne and performances at high profile festivals on both sides of the Pacific, it’s clear Explosions in the Sky are never at ease, or entirely off the clock. This creative restlessness has marked them as a most enduring, thrilling live and recorded act, year after year.

Sprawling, dynamic symphonies await audiences at all shows. Tickets are on sale Fri Oct 21 via handsometours.com. Do not hesitate.

EXPLOSIONS IN THE SKY TOUR DATES:
Tickets on sale Fri Oct 21 via handsometours.com