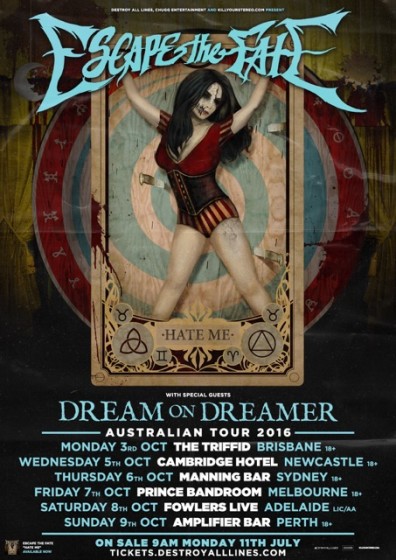 “We’re coming for everyone and we aren’t taking any prisoners,” says vocalist Craig Mabbitt

Stadium wrecking hooks, jackhammer breakdowns abound, Escape The Fate are bruisingly motivated and in the best shape of their career, meaning that fans are about to witness a new level of intensity and honesty in the bands live show.

Adding to that intensity, local supports have been added to the tour and they are primed to deliver.

BRISBANE: We Set Signals Post Hardcore meets Pop Punk, WSS have been treading the boards since 2012. Their covers of Katy Perry’s Roar and Carly Rae Jepsen’s Call Me Maybe are set standards and crowd favourites.

NEWCASTLE: Of Divinity will be trekking north from their Sydney base to deliver the metalcore assault they have ben spreading around the nation since 2013. They will be showcasing new tracks from their just released album Malice.

SYDNEY: Sienna Skies. One of Sydney’s longest running modern rock bands. Releasing their self titled debut EP in 2007, the band have become a staple in the local scene and with 3 full length albums under their belts and a new one Seasons on the way, Sienna Skies are the perfect appetiser for ETF fans!

MELBOURNE: Danger! Earthquake! have one of the best Facebook bios, you should read it. A wealth of info that can be summed up as they play post hardcore with a heavy focus on keyboard layering and avoid doing breakdowns at all costs!

Three piece rockers Apollo On Fire are first up for the Melbourne crowd. Their hotly anticipated debut album is due in November.

ADELAIDE; The Daily Chase, Metalcore from the desert! These Port Pirie natives have fast become the go to band in South Australia. Gaining fans along the way such as Amity’s Joel Birch and playing with Confession and FHTTS.
They also nabbed a Top 5 iTunes Metal chart debut with their Foundations EP!

PERTH: Emberville. Beginning life in 2010 as a pop punk act, they quickly morphed into a post hardcore band with rock leanings and toured relentlessly around the country. Earning the respect and sharing stages with some of the scenes biggest bands.

They’ve always done it their way and now Hate Me sees them coming together as a team with their most stable line up in the bands history, Hate Me is Escape The Fate as a unity of musicians who worked together both musically and lyrically and the result is an album forged in stone.

You want it, Escape The Fate have it in their arsenal – circle pit inducing breakdowns, head banging riffs, air guitar shredding solos, phones (lighters) in the air ballads…Australia fans…brace yourselves!!!

Tickets on sale now from: www.tickets.destroyalllines.com