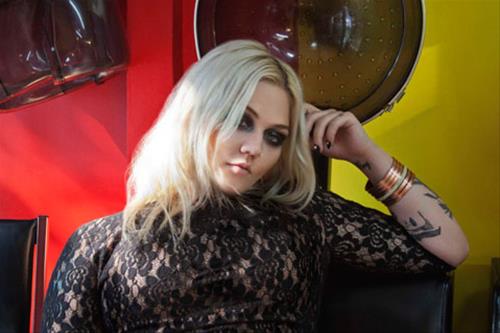 If you not already familiar with Elle King you soon will be. The sassy musician who loves both banjos and hobos, has just been nominated for two 2016 Grammy Awards for Best Rock Song and Best Rock Performance for her hit ‘Ex’s & Oh’s’. The song also spent three weeks on the No.1 spot in the Billboard Alternative Charts and hit the top 10 of the Billboard Hot 100. Elle King also made the No.2 spot on Billboard’s Top New Rock Artist of 2015 list.

Elle King’s musical style encompasses Country, Soul, Folk, Rock, and Blues. Born in Ohio and raised in Brooklyn, Elle retains her roots in a style that blends those worlds of both grit and mid-western charm. She ties her old Soul and Rock’n’Roll influences into a sound that’s all her own. King started playing guitar at age 13 and later picked up a banjo, inspired by the Hank Williams and Earl Scruggs records her family listened to.

King released her four-song debut The Elle King EP on Fat Possum Records. She was spotlighted as an “Artist to Watch” by Esquire Magazine and Refinery 29, and the EP garnered favourable press from Entertainment Weekly, Esquire, Teen Vogue, Perez Hilton, and Vanity Fair. The EP track ‘Playing for Keeps’ was chosen as the theme song for VH1’s Mob Wives Chicago and was featured in the national TV ad campaign for AMC’s award-winning Mad Men.

Elle has appeared on The Late Show with David Letterman and The Tonight Show Starring Jimmy Fallon and has toured with Of Monsters and Men, Ed Sheeran, and James Bay. Her full-length debut album Love Stuff was released to great reviews in early 2015 and was the highest new artist entry on Billboard.

We cannot wait to see this star on the rise come to our shores in March for her very first Australian Tour.

Elle King will be performing at the Corner Hotel in Melbourne on Tuesday 22nd March 2016 and the Metro Theatre in Sydney on Thursday 24th March 2016 for official Bluesfest sideshows.