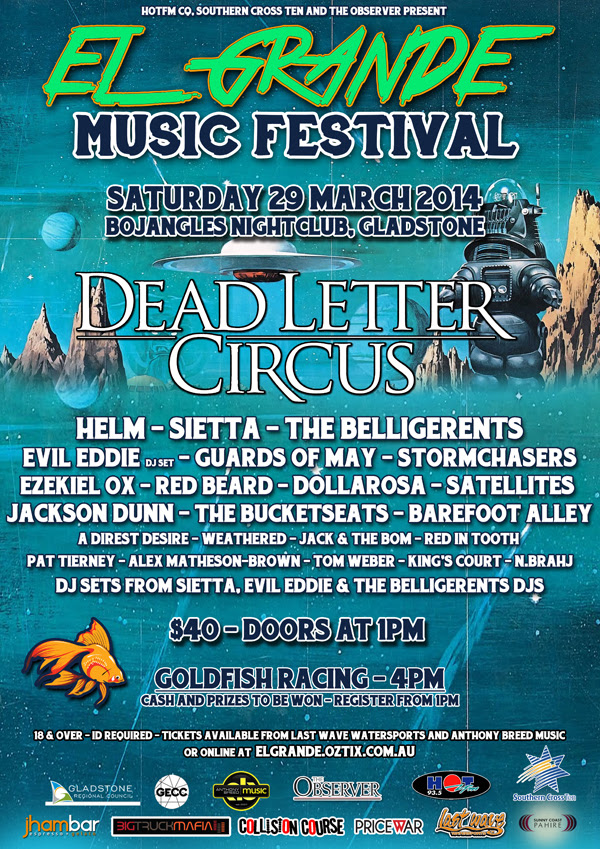 The change in venue for the festival was required after the previous two events sold out and required a larger space to accommodate Dead Letter Circus and the 25 acts playing on the day. Limited Physical Tickets will be available only for pre-sale through Last Wave Watersports and Anthony Breed music store for $40 or online at elgrande.oztix.com.au for $40 + Booking Fee.

There will once again be two stages, the Bojangles Main Stage and the Anthony Breed Music Acoustic Lounge. The event will begin earlier than usual and party on ’til the early hours – 1pm through to 2am. Local bands and acoustic performers will open the event and DJs will close the night out. Goldfish Racing will once again be a huge attraction – registrations open at 1pm and will take place at 4:00pm-5:15pm.

This time around, it is Dead Letter Circus who will grace the stage as the headliner of the festival – a massive coup for CQ rock fans. Dead Letter Circus are one of Australia’s most recognisable and successful rock artists – their last 4 national tours were SOLD OUT, toured with Muse and Linkin Park, lit up the main stage of the Big Day Out and scored two songs in the triple j Hottest 100 Poll. In 2013 Dead Letter Circus unleashed their second album, The Catalyst Fire, which scored a #2 Album Chart position in Australia on release, was named Album of the Week by influential radio station triple j and toured both Europe and the US.

Festival Organisers Nathan Bedford and Tim Price couldn’t be more happy with the result. “We have one of our favourite Australian Artists headlining the event, a bigger venue that allows music to be going in two spaces at once and it’s so good to see great Australian music coming to Gladstone.” beamed Bedford. “We are stoked with this lineup – we love bringing these artists to Central Queensland and seeing people coming from all over to the event. We can’t wait to party on the day with everyone on the barrier.”

Dead Letter Circus are joined by Helm, Sietta, The Belligerents, Ezekiel Ox, Guards of May, StormChasers, Red Beard, Satellites, Dollarosa and locals such as Red in Tooth, A Direst Desire, Weathered, Jack & The Bom, N.Brahj and Tom Weber and more. For Full lineup and further ticket details, go to http://www.elgrandefestival.com.

Brisbane and Bundaberg will get their own taste of El Grande Festival as well, with Sietta and Ezekiel Ox performing with MKO at New Globe Theatre Thursday March 27 ($10 Entry) and Sietta, Ezekiel Ox, The Belligerents and The Bucketseats playing Friday March 28 at Bundaberg’s The Club Hotel for Free! Both shows from 8pm.

Tickets are $40 and available from Friday January 31st at Last Wave Watersports and Anthony Breed music store for $40 or online at elgrande.oztix.com.au for $40 + Booking Fee.