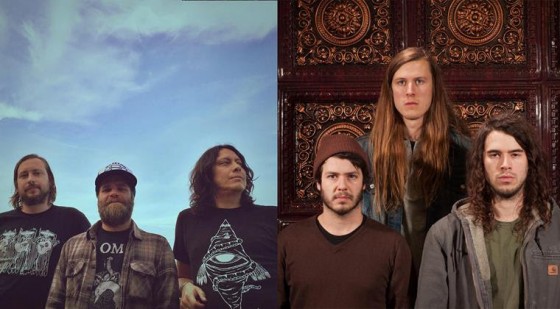 Earthless want you to know how it feels to touch the sky. With smoldering guitar riffs that stretch from here to infinity, the San Diego trio are at once cosmic and timeless, rooted in a profound respect for the Zeppelin/Sabbathian tradition yet with eyes firmly cast forward. Never mind the retro rock revivalists or the ’70s throwbacks – Earthless aren’t nostalgists; they’re sonic luminaries dragging psychadelia by the wah pedal into the 21st century and beyond.

Earthless got it right from conception – ride the riff until it becomes a black hole. – Austin Chronicle

Isaiah Mitchell is the kind of guitar prodigy that comes along only once in a generation. Underpinned by the military precision of Mario Rubalcaba’s drumming and Mike Eginton’s fundamental grooves, Mitchell’s chaotic fretwork is as unpredictable as it is ambitious.

Earthless don’t leave room for misinterpretation or error concerning their mission: They are a long-winded guitar trio, hell-bent on riding six electric strings directly out of this atmosphere. – Pitchfork

Earthless’ live show is a trip: you don’t know where you’re going, but you’re damn sure you better stay along for the ride.

Isaiah Mitchell’s guitar playing is a constant surprise, soaring, diving, streaking through the sky like a hawk playing in the updrafts along the face of a cliff. – Pop Matters

Elder are a sleeper cell of colossal talent. Never has three-piece so seamlessly merged the atmosphere of doom with the depth of stoner rock and the vitality of psychedelic rock. Their latest album, Lore, is a quiet masterpiece – a blizzard of riffs that shine with melody, dynamism and songwriting sophistication well beyond the young band’s years.

Elder have only just begun writing their own lore as a band, but with Lore, they have created an album that is, in a word, timeless. – Heavy Blog is Heavy

Few bands have the gall to cover Jimi Hendrix, and even fewer can do it well, but Elder did just that in June when they released a rip-roaring cover of Voodoo Child (Slight Return) for the Hendrix tribute Electric Ladyland Redux. Nick DeSalvo’s guitar sounds on the brink of bursting into flames as he blazes through solo after solo.

Like Sleep or Earthless — two bands who provide similar thrills using similar tools — Elder are a trio, and each member is a fucking giant. – Stereogum

Elder’s sonic mastery extends beyond the studio – the trio’s live documents and show-stealing sets at Roadburn and Psycho California are a testament to Elder’s limitless potential.

Elder and Earthless have never shared a stage before. There’s no telling what havoc these two riff lords will wreak. Don’t miss the psych trip of the year. Witness these two blow minds on the following dates:

Tickets on sale now through lifeisnoise.com, Oztix and venue outlets.