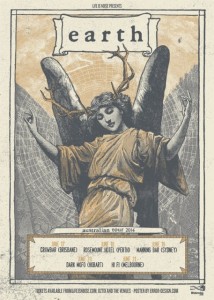 life is noise has announced the support acts for Earth’s upcoming Australia tour in June 2014.

In Brisbane, feast your ears on the hypno-blues of Dreamtime before they steal away to work on album number three. But first: bear witness to Morricone-styled westerns and the dark sludge of A Savage God – made up of No Anchor’s Alex Gillies and cast of some of Brisbane’s finest.

In Perth, Rachael Dease of Schvendes and the award-winning production ‘City of Shadows’ returns to the stage to debut her new band. She’ll be joined on the night by sound manipulators and guitar experimentalists Craig McElhinney and The Tigers’ Chris Cobilis, performing as a duo.

In Sydney, special guests include venerable post-metal stalwarts We Lost The Sea, fresh off the re-issue of their debut record ‘Crimea’ and currently working on a third LP, which we hear is their most experimental to date. Alongside them will be the sardonic noise rock outfit, Dead China Doll.

In Melbourne, Earth will be joined by sonic siblings Magic Mountain Band, who share Earth’s penchant for moody jams inspired by the vast expanses of barren landscapes. Also gracing the stage will be Bonnie Mercer, who, much like Earth in their formative years, deals in the extremities of sound and the art of the guitar, exploring the hypnotic capabilities of melody and feedback.

In the early 90s, Earth released three landmark albums that set the standard for drone metal. Taking their name from an early incarnation of Black Sabbath, Earth sought to distill rock music to its fundamentals, employing repetition, reverb and distortion to hypnotic effect. The group pioneered the brooding, minimalist aesthetic that went on to inspire a new wave of atmospheric experimental rock, including the likes of Sunn O))), Boris and Om.
Earth 2 remains the document for drone-and doom-minded depressives.
– Pitchfork

After an extended hiatus beginning in the late 90s, Earth’s only constant member Dylan Carlson revived the band for the release of 2005’s Hex; Or Printing in the Infernal Method. Drawing influence from novelist Cormac McCarthy and composer Ennio Morricone, the record saw Earth’s sound transform, merging the band’s signature meditative drone with country folk-inflected rhythms and plodding, introspective soundscapes.

The three records that followed continued in the same vein, building layer upon layer of sonic sprawl, letting the space in between the notes speak as much as the music itself. Earth are hard at work on an eighth studio album, but their legacy as innovators of post-rock, drone, doom and everything in between is firmly established.

Earth evokes time on a different scale – not days or calendar-seasons or even years, but geologic epochs, upon which human generations spill like raindrops into the thirsty dust.
– Tiny Mix Tapes

Earth’s live show is like a religious awakening: cascading, hypnotic and utterly consuming. See them on the following dates:

Tuesday June 17 – Crowbar – Brisbane
With Dreamtime and A Savage God

Tickets are available from lifeisnoise.com, oztix and the venues

Earth are also playing at Dark MoFo in Hobart.