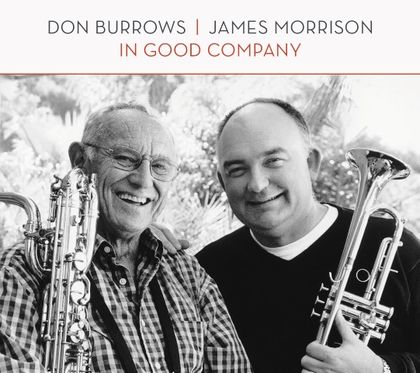 ABC Jazz is proud to present the final album from one of Australia’s greatest musicians, Don Burrows, playing with his finest pupil, the legendary James Morrison.

In Good Company – released here for the first time – documents an afternoon in the studio with Don and James, and represents a golden opportunity to witness these two brilliant musicians ‘jamming together’.

In typically virtuosic style, they each play three instruments (Don on alto flute, clarinet and alto saxophone, James on trombone, bass trumpet and trumpet), accompanied by Phil Stack on acoustic bass. The recording showcases the intimacy of their duet, and the musical wit and invention that has seen them become two of the world’s most celebrated musicians over the past decades.

Don Burrows has performed with luminaries including Stéphane Grapelli, Dizzy Gillespie, Frank Sinatra, Nat ‘King’ Cole, Oscar Peterson and many more. He was the first Australian jazz artist to reach Gold record status, and for six years during the 1980s he fronted The Don Burrows Collection on ABC TV. It was while he was teaching at the NSW Conservatorium of Music that he discovered the young virtuoso James Morrison, immediately including James in his band and kick-starting the career of the man who has taken on Don’s mantle as Australia’s most loved, renowned and dynamic jazz musician. The pair remain deeply close to this day: Don is a part of the Morrison family, so much so that James’ children refer to him as ‘GranDon’!

In this deluxe edition, In Good Company is accompanied by a bonus disc of recordings from their early years together – including a live recording from the Sydney Opera House, and the first-ever release on CD of ‘Essa Cara’, a Brazilian tune written by Don and recorded live in 1982.

“Jazz is music that is passed on to each new generation by playing it, you can’t learn it from the written page, or even by being told about it – you have to jam together. This means that most musicians of this genre have a mentor, and I was lucky enough to have the best…Don Burrows.

“Don taught me many things but he mostly passed on his unbridled passion for making people happy with music. I will always carry with me the way he looked when he played – a smile that said he was doing what he loved and a glint in his eye that meant he couldn’t believe his luck to be a jazz musician.

“He had many great sayings but one struck me the most – Don loved playing with other people and he said, ‘You’re only as good as the company you keep,’ and in his company I’ve been at my best.” – James Morrison, November 2015