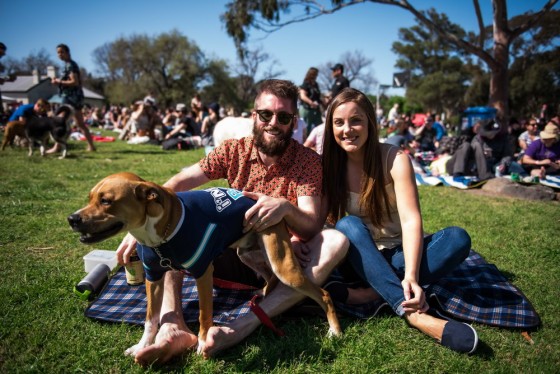 Oscars Law & One Little Indian Enterprises are very proud to present, Dogapalooza, Melbourne’s first dog-friendly (and hands down most adorable) music festival to be held on Sunday October 9th on the green grasses of Burnley Park, Richmond.

The promoters are also very pleased to announce the first acts on the bill are (insert drum roll) The Little Stevies and Sam Lohs, and are as pleased to (not) announce the confirmation of a very special guest (ooh the mystery).

The Little Stevies are a Melbourne based folk-influenced duo who are bound to captivate dog lovers. “The sisters have had resounding media acclaim from the Age to Rolling Stone and are a perfect fit for our laid back baby festival”. Sam Lohs of the Rosie Burgess Trio is expected to lay down the relaxed soundtrack of a sunshine filled “dog love in” with her exceptional vocal abilities.

This gorgeous boutique festival is a quintessential ‘love fest’ of dogs (for dog owners and their dog coveting friends). After last years sold out attendance, Dogapalooza promoter, Abby Gee is pleased to announce a site extension and council approval for a capacity increase for this years offering. “Giving our boho dogs and their lovers more trees, more shade and more room to roll about in the grass” Gee stated.

Dogapalooza is a lay about in the sun and take it down a notch offering, behold the wonder as a thousand dogs make friends and influence people to a soundtrack of Melbourne’s finest artists and spring’s sunshine. These furry inner city hipsters (and their owners) have top notch ethical food offerings (including Dogapalooza’s own in-house vegan BBQ) and Top 10 best food truck’s in Melbourne, title holders, Little Mushroom Co, on offer, as well as the dog loving stalls of our beneficiary rescue groups and boutique dog product vendors.

Official limited edition merchandise is available on site, as well as the uber exciting inaugural Dogapalooza Awards with categories including “best inner city hipster” and “quiet achiever”, for those of you who want to establish a social hierarchy, amongst the other owners at the dog park.

And finally for those of you with small people, we have them covered with face painting, old school games, and of course a thousand adorable socialised dogs to love on. First release tickets available Wed 17 August via Oztix for a very limited time so be quick!

For more information go to :
www.facebook.com/DogapaloozaMelbourne