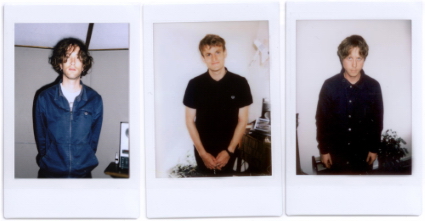 A wired and frenzied collection of wrought glares and sonic punches in the face is what you can expect from Die! Die! Die!‘s forthcoming EP ‘What Did You Expect.’ The latest offering from the Dunedin noise punk three-piece is set to drop this December on Bad Health with an early 2016 Australian tour in the works to back it up.

The EP serves as the follow up to Die! Die! Die!’s 2014 release, the band’s fifth full length studio album ‘S W I M,’ that was released nationally on Black Night Crash Records (now Bad Health.) The five tracks on ‘What did You Expect’ instinctively move between moments of urgency and despondency; where barbed chords haze over Michael Prain’s bludgeoning drum rolls as front-man Andrew Wilson chokes his way through the barrage of frenetic fuzz. Not only does the EP see Die! Die! Die! further establish themselves as seasoned authorities on noise-rock but it also reiterates the band’s impressive ability to instil solid melodies over, under and within all the chaos.

Recorded and mixed by Rory Attwell (Yuck, Male Bonding, Palma Violets) at Lightship95 studios in East London and mastered by Dave Cooley at Elysian Masters in Los Angeles, the EP also features Attwell on bass duties and Miss June’s Annabel Liddell on backing vocals for the tracks ‘Dark Arrow’ and ‘(I Love how You) Listen To The Radio.’

‘What Did You Expect’ will be released on Friday the 4th of December through Melbourne based independent record label Bad Health (formerly Black Night Crash Records).