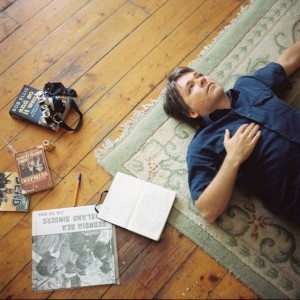 If there’s one constant in the disjointed life of Darren Hanlon, it’s his annual Yuletide show series. “The years seem to get faster but for me the Christmas tour is the playing card in the spokes that mark each turn,” he says.

And the season is upon us again. Nearing a decade of existence, this year will see Hanlon once again take the stage in a blaze of solo informality, keeping things loose and inviting special guests to sing a song or two.

So it’s business as usual for Australia’s favourite songsmith, except that this year the shows are going further afield. This tour marks the first time Hanlon has ever played Castlemaine, as well as an often-requested Melbourne all-ages show.

Listen to Darren Hanlon’s new single ‘When You Go’ here:

The album journey was an unplanned, and sometimes perilous, lope through the American South, with different songs recorded in a serious of different towns and studios, often with musicians Hanlon met in the studio or found busking nearby. ‘When You Go’ was recorded early in the journey at Electraphonic Recording, in Memphis Tennessee, with Scott Bomar, Bomar is renowned for his soundtrack work with Memphis filmmaker Craig Brewer (Hustle and Flow, Black Snake Moan), as well as being the instigator of the band The Bo-Keys, made up of former legends of the Hi Rhythm Section and Stax Records sessions.

Don’t miss Darren Hanlon play his legendary Christmas shows at a venue near you in December.

Sunday 21 December
The Globe, Brisbane QLD
6.00pm early show. ALL AGES (with a parent)!
With special guests to be announced