2015 has been one helluva year for Dallas Frasca. From touring France & the UK and completing a national Love Army tour of Australia, to a cracked skull whilst crowd surfing at the Big Pineapple Festival and the global syncing of Success is the Best Revenge with new reality TV show, Bondi Ink, the buzz continues with the announcement of upcoming headline shows and tours with The BellRays in August and The Beards in October.

Kicking off August 8 in Newcastle, Dallas Frasca joins The BellRays for a whirlwind week-long tour, that continues on to Sydney, followed by Geelong, Ballarat, Adelaide, and Melbourne. The BellRays hail from California and have been described as a mix of punk, rock and soul, a perfect match for Dallas Frasca, with both artists renowned for their high energy performances.

The band then heads to the snowfields, for three headline shows at Mt Hotham and Falls Creek between August 20 & 22 before trekking home for a quick break and then taking off to sunny Queensland and performing in Toowoomba and Noosa on September 10 & 11.

October heats up and takes the riff rock trio up to Arnhem Land and Kuranda before it gets a little hairy with Adelaide four-piece, The Beards, for their ‘Ten Long Years, One Long Beard’ Anniversary and Album tour. Dallas Frasca will take the stage with Australia’s favourite beard-themed propaganda rock band, in Melbourne on the 8th, before moving on to Frankston, Mulgrave, Adelaide, Wallaroo, Bondi, Newcastle and Sydney. 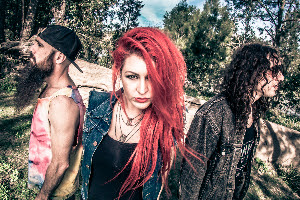