– Clutch is available at iTunes

2010 it’s all about the live show. In 2010 Clutch return to Australia joining the likes of Faith No More, Jane’s Addiction, AFI, Placebo, Anthrax and many more for the Soundwave Festival. And now the band would like to announce their own national headline tour that will for the first time ever, take them to Western Australia.

Since 1991 the band have been challenging rock n’ roll’s limits, and Clutch show no signs of abandoning the unique experimentation that has defined them. “If you’re not learning then you’re retiring,” says Neil Fallon. “You’ve got to take risks to learn, and there’s always something to learn. When you go to your grave, you’re only going to have learned a fraction of what’s truly out there.”

Clutch will be joined on the road by Sydney powerhouse duo The Fumes.

“Tonight restored my faith in rock! Proving there are still bands out there that are rocking out the right way and not selling out there integrity, and Clutch is definitely one of them. An awesome night.” Blunt Magazine

“For anyone seeking their new favourite band, look no further. To those who know how to rock, I salute you.” Drum Media

“Their final set reeks of brilliance. It all blends from one groove to the next and when it finally ends, seemingly ten seconds later, well, it’s like jumping off a runway steam train and landing on your feet not moving with no noise at all – it’s an eerie prospect, but one which you know is all good, because Clutch delivered the goods again.” Inpress Magazine

– Faith No More available at iTunes 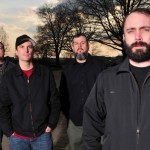