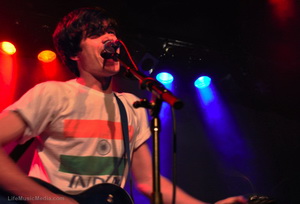 This was a farewell gig of sorts for Cloud Control as the Blue Mountains-via-Sydney band are temporarily relocating to the UK ahead of the overseas release of their debut album. Starting off with more of a fizzle than a bang, 7:00pm had been listed as the start time yet the punters (mainly young teenage girls in florals and itsy bitsy shorts vying for the “ indie cred” tag) were left whiling away the time listening to Blondie’ s greatest hits. It wasn’t all bad though; because we were treated to watching some rather animated bartenders dancing along to Ms Harry and Co.

At 8:30pm it was finally time for psychedelic Sydney quintet, Deep Sea Arcade who entered the stage to intermittent sprays of smoke. A decent-sized crowd were treated to their dream-like blend of hazy pop. Opening song, “ Jam” was an aptly titled freeform instrumental that seemed more like an interlude than the start of the main event, but it was to be all about well-honed psychedelic pop thereafter.

“Devil” boasted some great guitar tuning as the group were lit with ten types of colourful light, an almost trippy visual compliment to the sounds synonymous with the drug-fueled sixties. Single, “Don’ t Be Sorry” saw the band bop along on their very own magic carpet ride-meets-magical mystery tour.

“Easy Now” was all about Beatlesque psych rock while “Keep On Walking” (no relation to INXS’ “ Just Keep Walking” ) had an excellent, high bass riff that could’ ve been played by Joy Division’ s Peter Hook. Overall, it was more frantic and urgent than the other tunes, particularly “Lonely In Your Arms” which was all about catchy Shadows-like guitars. The young crowd seemed to love sampling from the Deep Sea Arcade gravy train and most would’ ve enjoyed seconds had they been permitted.

Seekae performed next and boasted a Kraftwerk-esque set-up including a hefty arsenal of computers and other tech gadgetry. Exclaiming how great it was to be home, the trio put on an ambient feast of sonic wizardry with plenty of spinning reverb and electronics that would’ ve fit in seamlessly on Triple J’ s radio program, The Sound Lab.

The group seemed like an odd choice of support act but the crowd got behind the oddball samplings that at times twinkled like moonbeams; starry nights by the seaside; and at other moments like hypnotic binary code from some future civilisation light years away from home. They performed the songs “ Void” and “ Crooks Sidechain,” with their free, unconstrained sounds hinting at the industrial atmospherics synonymous with Martin Hannett’ s knob twiddling and kraut rockers Kraftwerk, Neu! and Can. At times the sounds pulsated through the Metro with earth-shattering volume but the kids loved the strange diversion and twisted behemoth of beats.

At 10:30 Cloud Control came bounding onto the stage like they were high on red cordial and brimming with obvious youth and beauty. “Mediation Song #2 (Why, Oh Why)” saw the punters clap along to the crunchy synth and great vocal interplay between Alister Wright and Heidi Lenffer. The former entertained us as he did his best impersonation of Pete Townshend, jumping around the stage with his guitar and notable reckless abandon.

As the band pulled off an excellent set with their blend of shiny pop (think The Shins, The Boat People, et. al) including the songs, “This Is What I Said” and “Vintage Books” . Wright dashed about the stage during the former while “Just For Now” saw us all becoming like REM’ s shiny, happy people and participants in the hippie love fest that was “Just For Now” .

Things would be slowed down a little for “The Rolling Stones,” a song unlike its feisty namesake. Instead it was a rewarding slow-burner of a pop ballad complimented by gorgeous ink blot visuals as the group continued to keep spirits sky high despite dropping a less immediate and softer song.

“ My Fear # 2” was all bubblegum and peppermints as a couple of kids started hailing in appreciation for these indie rock gods (and goddess). To think that this reviewer had seen the group perform an all-ages show to a near-empty Annandale back in late 2009 only for them to return victorious to a sold-out Metro show in the space of less than a year was nothing short of a major and deserved triumph. Like a proud parent all I could do was beam (and not just at the optimistic songs) as I thought about this modest band making good with their extreme talent and well crafted pop songs as they ready themselves to take on that much more.

Lenffer performed sultry lead vocals on “ Beast Of Love,” a mature love song to rival any the world’ s quality songwriters’ hits and like an intricate antique it was artful and precious. But it was soon time for a return to the rainbows and colourful pop the group are known for- “ Hollow Drums” had textured harmonies that reached up to the high heavens while “ Death Cloud” had stirring bass riffs that had everyone clapping along despite it being about bad weather.

Shortly after this something truly amazing happened. While the crowd had been clearly enjoying the proceedings for the entire set, by the time “ Buffalo Country” came on it seemed like things were taken to a whole new level with the song acting like a ray of light in a dark venue and an even badder world. From here it was all killer, no filler with “There’ s Nothing In The Water We Can’t Fight”. The big single got the crowd swaying along with their spirit fingers, camera phones and arms held high in the air.

After a brief stop backstage, the group returned for an encore including a cover of Kid Cudi’ s “Pursuit Of Happiness’ with punters singing along to the Triple J Like A Version track. “ Gold Canary” saw the group skipping around a rose tree of sorts with their afrobeat vibes borrowed from Vampire Weekend and visuals of a tweetie bird reminding us all to fly away, fly today before the finale of the hour-long set, the kind-hearted, “Ghost Story”.

The band had played their largest headline show to date, entertaining a hometown crowd with so much verve and enthusiasm. Warming the cockles of every heart in the room (and those people fortunate enough to secure tickets to such a stellar show) perhaps all that’s left to say is those great words by Yazz and “The only way is up” . For it’ s obvious that this young group will continue achieving success both at home and abroad.

The Drums “The Drums” – EP Review
All articles by Natalie Salvo…