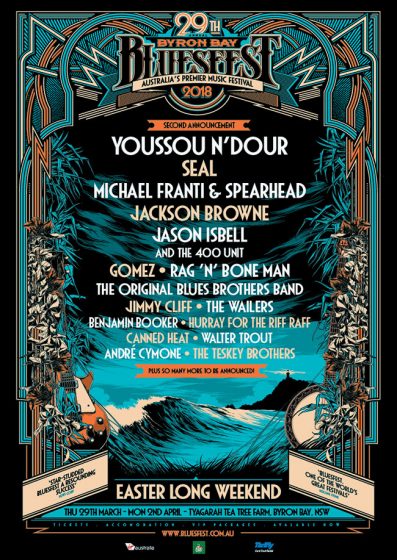 BLUESFEST DELIVERS ANOTHER 16 WORLD CLASS ARTISTS FOR THEIR 2018 FESTIVAL

Bluesfest has delighted music lovers across Australia by announcing another 16 artists who will perform at the festival in 2018. In typical Bluesfest fashion it’s a truly eclectic mix of heritage artists, festival favorites and exciting new comers – there’s something for any true music lover.

Our second Bluesfest artist announcement features a cross section of artists – from the greatest African artist of our time, to incredible singers (in a year we already have such incredibly great singers already announced), to the best in Americana, Reggae, Blues & Roots music and more. From top to bottom, I am so proud of Bluesfest’s new announcement of 16 amazing artists. When added to those already announced, and with more to come, it’s going to be very special Bluesfest. Each festival is a hand crafted labour of love. I work hard to present a truly world class event, and I take pride in it being very special, EVERY YEAR.

Legendary African artist Youssou N’Dour is coming with his 20 piece band of musicians, singers and acrobats to play Bluesfest on Good Friday in what will surely be remembered as one of the most spectacular performances ever at the festival.

In a year we are already presenting the great singers Robert Plant and Lionel Richie, we now announce that the soulful Seal and Jamaica’s greatest singer Jimmy Cliff will also play at Bluesfest 2018.

Michael Franti and Spearhead have been playing Bluesfest for a long time now. The reason we keep bringing them back is simple: they are one of the best festival bands…..EVER, PERIOD. FULL STOP. They are guaranteed to get everyone pumped, and into the collective trance state Michael calls, One Mind. Michael Franti and Spearhead at Bluesfest is an event not to be missed.

Jackson Browne, a true renaissance man; as well as a gifted artist. He is returning with his classic songs and important message about human rights, charitable contributions and environmental activism. Jackson is a member of both the Rock & Roll and Songwriters Hall of Fame, with hits The Pretender, Doctor My Eyes, Take It Easy, Somebody’s Baby and Running On empty and so many more.

Since Jason Isbell and the 400 Unit last played Bluesfest, he has won Two Grammy Awards, and after his clean sweep at the Americana Music Awards in 2014 winning Song, Album AND Artist of the year, he has since also won Song AND Album of the year in 2016, plus had a number one album, TWICE in the Billboard Country, Folk AND Rock charts. This is an artist whose time has come. His performances at Bluesfest 2018 are not to be missed.

In Contemporary music we have Rag ‘n Bone Man coming for more amazing performances after a highly successful tour earlier this year. In exciting news for fans Gomez are getting back together for their 20th anniversary tour. We also have the amazing Benjamin Booker, Andre Cymone, The Teskey Brothers and Hurray for the Riff Raff a band fronted by Alynda Segarra. Comparisons are already being made to Rhiannon Giddens and Gillian Welch!

They are on a mission from God, and coming to Bluesfest…..yes, it’s the truly incredible Original Blues Brothers Band. They have only played Bluesfest once before, and they are coming back to Australia by popular demand…. simply showstoppers.

Walter Trout will play Bluesfest after cancelling his scheduled 2014 tour, due to his needing a liver transplant. Walter is doing fine nowadays, and has just delivered his most successful career defining album yet, the Billboard Blues chart number one album We’re All In This Together, with guests Joe Bonamassa, Kenny Wayne Shepherd and Charlie Musselwhite to name a few. Interestingly Warren Haynes, Eric Gales and Joe Louis Walker who are all playing Bluesfest 2018 also feature. There’s going to be some serious jams going down. Walter has also recently won two Blues Music Awards. It’s hard to believe he last played Bluesfest in 1995!

Canned Heat, the US Blues ‘n Boogie legends, played the first ever Bluesfest in 1990. They are one of a handful of Blues bands who have had hit records, and, as a result, bought many people to The Blues. Their hits include “Let’s Work Together”, “Going Up The Country”, and the Classic “On The Road Again.”

We love our Reggae music at Bluesfest, and have the greatest Reggae singer Jimmy Cliff coming to enthral us with such classics including “You Can Get It If You Really Want”, “The Harder They Come”, “Sitting in Limbo”, “Wonderful World, Beautiful People”, “Many Rivers to Cross” and many more.

The Wailers, always led by Aston ‘Family Man’ Barrett have kept the music of Bob Marley alive and well. Family Man made a promise to Bob, before he passed, that he would do this, and he has kept his word, and continued on this crusade for 30 years. The Wailers will play every night at Bluesfest, presenting different classic albums by Bob Marley and the Wailers plus all the hits. For the first time in many, many years Family Man will be joined in stage by original Wailers member Junior Marvin on guitar and vocals, and Tyrone Downie, on keyboards. To Roots Reggae fans, this will be a very special occasion.

I hope you like this announcement as much as I do, and that you will join us next Easter.

With love and peace

Headlining this announcement is iconic Senegalese artist Youssou N’Dour who according to Rolling Stone “is undoubtedly one of the most beloved artists in the entire continent of Africa”. He is also known to Australian audiences through his work with Paul Simon, Peter Gabriel and through his smash hit 1994 single “7 Seconds” featuring Neneh Cherry.

Seal is a true sensation. He first got the world’s attention with the hit “Crazy” and was launched into superstardom with “Kiss from a Rose”. He has sold a staggering 20 million albums around the world, won three Brit and four Grammy awards. He has recently won hearts in Australia as a coach on the popular program The Voice. In his newest album ‘Standards’ combines his unique voice with some of the greatest Jazz stands and swing classics ever written. Bluesfest welcomes this true legend of soul to their stage in 2018.

There is no doubt that Michael Franti is one of Bluesfest’s most beloved artists, so it’s a thrill to announce he’s back for the first time since 2015. A Michael Franti and Spearhead show is a celebration, where tears of joy are shed, new friends are made and souls are uplifted.

In an announcement that will make a lot of fans very happy, Bluesfest has added Jackson Browne to the 2018 festival. Browne has written and performed some of the most moving songs in popular music and has defined a genre of song writing charged with honesty, emotion and personal politics.

Bluesfest welcomes Jason Isbell back to the festival in 2018 with his brand new album ‘The Nashville Sound’. Since he last performed at the festival he’s won 2 Grammys, as well as song and album of the year in at the 2016 Americana Awards. He’s an absolute star and it’s an honour to have him play at Bluesfest once again.

Bluesfest is proud to welcome Gomez back to Bluesfest for the first time since 2007! It’s also the band’s first tour in over 6 years, just in time for the 20th anniversary of their breakthrough album ‘Bring it On’. With so much to celebrate their festival appearance is not to be missed.

Rory Graham, AKA Rag‘n’Bone Man has injected an exciting new twist into the blues music he grew up with in his parental home in East Sussex bringing it bang up to date using the beats and production methods of contemporary Hip-Hop. Equally he resurrects age-old themes of loss and romantic pain with a voice so immediate, raw and expressive that it transfixes anyone in earshot with its sheer size and elemental power. It is with great excitement that Bluesfest announces Rag’n’Bone Man for their 2018 festival.

Its official, the Blues in Bluesfest just got a whole lot Bluesier with the announcement that The Original Blues Brothers Band is alive and well and returning to the festival next year. It will be a feel good, sing along, can’t wipe the smile off your face kind of performances from some extraordinary musicians.

Jimmy Cliff remains a forceful voice of power and conscience, creating new music as vital and vibrant as ever. He completely blew us all away with his spectacular and energetic performances at past festivals; we can’t wait for him to do it all over again!

Bluesfest is wrapped to once again present one of the most significant bands touring the world today: The Wailers. Their prodigious mission, led by legendary Aston “Family Man” Barrett is to uphold the legacy of Reggae prophet Bob Marley. This band is the only authentic version of The Wailers currently touring, featuring musicians who played with Marley on records and stages across the globe. They will play a different classic album by Bob Marley and The Wailers plus other classic hits each night at the festival.

Benjamin Booker is a new breed of Bluesman. Based in New Orleans he draws his influence from post-War electric Blues, and garage punk. In 2017 he released ‘Witness’ an album that he created in response to the racial tensions facing America in 2017. The title track features Bluesfest favourite Mavis Staples. Bluesfest welcomes this exciting, innovative artist to Byron Bay in 2018 and are sure he’ll be the talk of the festival.

With musical influences as diverse as New Orleans, The Bronx and Puerto Rico, Hurray for the Riff Raff’s sound is all their own, and it’s sure to delight Bluesfest audiences when they take the stage at Bluesfest 2018. The band is fronted the dynamic lead singer/songwriter Alynda Segarra whose lyrics ambitiously interweave the cinematic stories of a wandering soul who finally realized she needed to connect with and honour her ancestors.

Blues n Boogie .. Boogie n Blues , no matter which way you phrase it only one name rises to the top: Canned Heat. Some say they invented the genre that made them a global phenomenon 40+ years ago. This legendary band will bring their unique blend of roadhouse electric blues, rock and boogie back to the Bluesfest stage in 2018.

Walter Trout is the beating heart of the modern blues rock scene, respected by the old guard, revered by the young guns, and adored by the fans who shake his hand after the show each night. Trout is a consummate musician, loved by many Bluesfest attendees.

It is with great excitement that Bluesfest can announce that in addition to his spots as special guest vocalist with The New Power Generation, André Cymone will also wow audiences with his own performances at the 2018 festival. André Cymone is an American bass player, songwriter and record producer. Raised in Minneapolis, Cymone and schoolmate Prince laid the groundwork for the revolutionary “Minneapolis sound”. Bluesfest audiences won’t be able to resist dancing when this smooth hit-maker takes the stage in 2018.

Bluesfest is delighted to announce The Teskey Brothers for the 2018 festival. Honouring that old school Motown sound and working it into something of their very own, the Australian four piece stunned many in 2017 with their gorgeous debut album ‘Half Mile Harvest’. A raw combination of soul and blues, the record has warmed the hearts of listeners all around the world. After a string of sold out shows across Australia, USA and UK in 2017 the future is looking very bright for these four friends from Warrandyte. This is an act on the rise and not to be missed at Bluesfest 2018!

These artists join those already announced:

THE 2017 ARTIST DAILY PLAYING SCHEDULE IS AVAILABLE ON BLUESFEST.COM.AU

Festival and Camping tickets are now on sale through bluesfest.com.au or by phoning the Bluesfest office on 02 6639 9800