Following yesterday’s massive announcement of the first group of talented artists and cultural leaders in the Boomerang program that will feature at Bluesfest next year, today, the 27th Bluesfest Byron Bay, held over Easter (Thu 24 March – Mon 28 March 2016), at its exclusive event site (the lush 300 acre Tyagarah Tea Tree Farm just outside of Byron Bay), releases yet another star studded artist announcement.

Today’s announcement adds a further 10 artists to the bill, bringing the total 2016 artists announced to date to a whopping 62! There is clearly no stopping Bluesfest, having now released well over 70% of all of their artists for the 2016 line-up with more artist surprises up their sleeve.
“We’re getting the band back together”, yes that’s right, Bluesfest’s latest stellar announcement features The “Original” Blues Brothers Band! Get out your sunglasses at night…..they’re back…on a mission from God to bring the Blues right to your home festival….BLUESFEST.

The “Original” Blues Brothers Band will close Bluesfest 2016, Easter Monday, on one of the main stages, in an absolute Blues Bonanza, where you can dance away your Blues in an exclusive performance, before the long wait until Bluesfest 2017. Yes, you read right; you can ONLY see The “Original” Blues Brothers Band at the place they should be playing at, exclusively at Bluesfest. Hit it!

The band will be led by Soul music icon Steve “The Colonel” Cropper, who has written more classic Soul hits than anyone else in the game, was the guitarist of the Stax Records house band, Booker T. & the M.G.’s, has backed artists such as Otis Redding, and was ranked by MOJO Magazine as the second best guitarist ever.

Further additions to the Bluesfest line-up include the legendary Don McLean – The man himself. Responsible for contemporary music’s most celebrated classic ‘American Pie’, Don McLean is returning to Australia for the first time in three years and to Bluesfest for the first time in eight years!
Other outstanding International artists in this announcement include:
Gospel royalty The Blind Boys of Alabama, who will be returning to Bluesfest for their seventh time with their moving and entertaining show.

Canadian born Jeff Martin (The Tea Party) who now resides in the Byron Bay area, is one of a kind and will blow Bluesfest audiences away with his Heavy Metal Blues Rock, giving fans exactly what they need!

New York based duo The Mastersons, whose harmonious Alternative Country and Americana melodies will have the audience mesmerised.

Archie Roach is a national treasure, the voice for Indigenous justice! Bluesfest audiences will be captured by his powerful, inspiring and generous voice, which defines Alternative Rock and World music. Archie Roach will also be appearing at Bluesfest as part of the Boomerang Festival line-up announced yesterday, in conversation on 25 Years of Charcoal Lane.

Bluesfest is excited about the return of an Australian Rock legend and another ‘Byron Bay local’, The Cruel Sea’s Tex Perkins – perhaps a little different to when our audiences saw him last. This time around Tex will be coming with The Ape, an Australian supergroup like none other; lead by Tex, and featuring Raul Sanchez (Magic Dirt) on guitar; Gus Agars (The Dark Horses/The Gin Club) on drums and vocals; style king Pat Bourke (Dallas Crane) on bass and piano.

Hussy Hicks, the Bluesfest Busking winners of 2010 are bringing their unique musical skills of Blues, Country, Gipsy and Roots back to Bluesfest after successfully touring internationally. 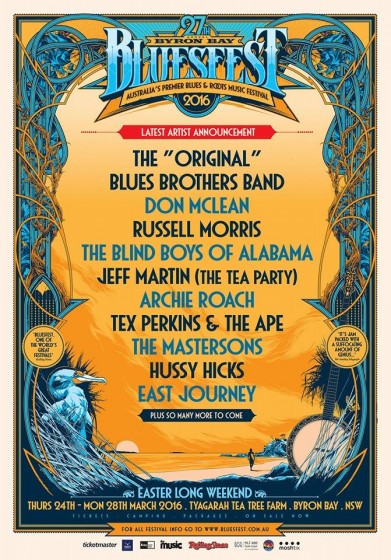