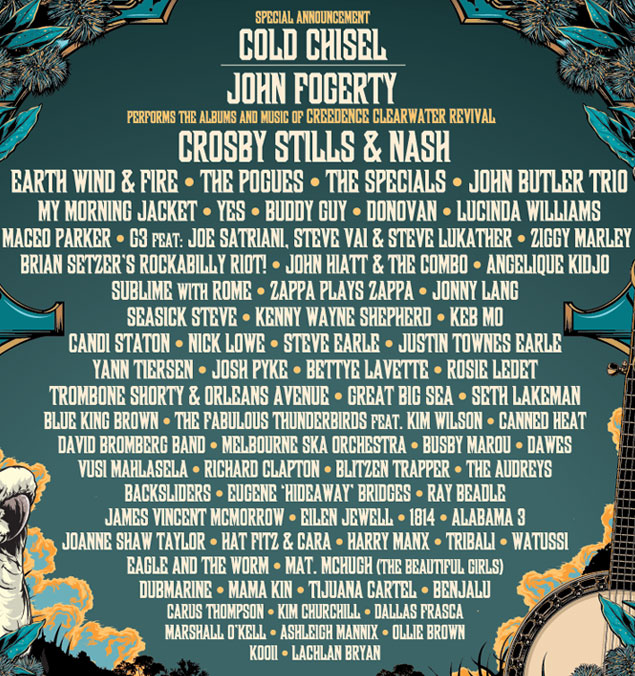 Festival director Peter Noble says: “We are thrilled to announce a second and spectacular 6pm sunset show for John Fogerty on Easter Monday. This time he will perform his Creedence Clearwater Revival Album ‘Green River’ in its entirety, plus his ‘bonus’ set drawn from the canon of his solo and CCR hits. This special sunset performance will set the scene for Bluesfest’s closing night with many more wonderful artists to follow afterwards.

So far we have unveiled some amazing headliners for Bluesfest 2012, lived through the Roger Daltrey cancellation, celebrated the joy of many amazing bands coming this year but now our final artist release gives Bluesfest its final touch!
This final announcement is also no mere festival filler – many of these artists are the finest rocking, dub, swampy, folk, country and smoking blues artists – there is a good chance one or two of your favourite Bluesfest 2012 discoveries are only being announced today.

The complete, official & downloadable Playing Schedule is also now available on the Bluesfest website www.bluesfest.com.au giving you the exact playing times of each artist.”

The 23rd Bluesfest is taking place between Thursday 5th of April and Monday 9th of April at its Festival Home at Tyagarah Tea Tree Farm just outside of Byron Bay.

If you have not secured your tickets to Bluesfest 2012, now is the time to act. Tickets are selling very fast and some Festival days are headed towards a sell-out.

Tickets are on sale through www.bluesfest.com.au

Here are a few photos from Bluesfest 2011