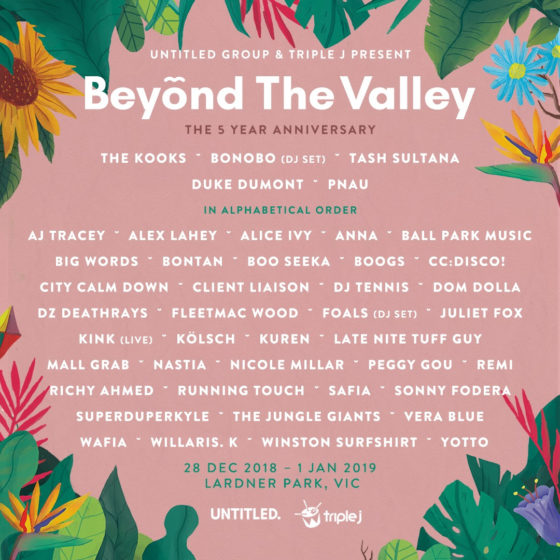 Back for its 5th Anniversary and finest NYE celebration to date, Beyond The Valley announces its exciting first artist line-up for 2018.

Taking place across 4 days from the 28th of December, 2018 through to the tiny hours of January 1st 2019, amongst the lush and rolling, emerald hills of Lardner Park, Lardner, Beyond The Valley has over the past 5 years become renowned for its cutting edge musical line-ups and amazing high end festival experience. With a selection of artists hand-picked for maximum musical satisfaction, across multiple genres, Beyond The Valley welcomes:

The Kooks have enjoyed a steady ascent since their five times platinum 2006 debut ‘Inside In/Inside Out’. A new wave of young fans have seen them since amass over one billion streams and head out on a number of sold out world tours. They are on their way down to Australia in support of their new album ‘Let’s Go Sunshine,’ which is being touted as their very best. Armed with what is sure to be the guitar album of 2018 and a back catalogue of pure indie gold, The Kooks will take BTV into the stratosphere!

Simon Green, aka Bonobo has been thrilling electronic music lovers across the planet with his beautiful, rich productions since the year 2000. Since that time, and across half a dozen acclaimed albums and various projects, Bonobo has grown in stature to represent the very zenith of the electronic form. A musician with a track record for impeccable taste, BTV is in for a rare and special treat when Bonobo hits the decks for this year’s celebration, it’s going to be magic!

From busking on the streets of Melbourne, to commanding sold out audiences on main stages across the globe, Tash Sultana is Australia’s reigning queen of roots inspired pop rock. A multi-instrumentalist who first started playing on a guitar gifted to her at the age of 3, Tash has gone on to become one of the world’s most in demand singer songwriters. With a string of amazing singles from her forthcoming debut album Flow State already creating massive waves, 2018 is going to be another watershed year in the career of this talented musician.

After first making his name as a remixer for the likes of Lily Allen and Bat For Lashes, English songwriter, producer and DJ Duke Dumont has scaled the very peaks of international electronic dance music. Dumont’s breakthrough single ‘I Got U’ in 2014 rode all the way to the number 1 spot on the UK singles chart and signified the arrival of a new dance superstar. A seasoned traveller and no stranger to Australian fans Duke Dumont is going to bring the excitement factor to a peak at Beyond The Valley this year.

Australian Electro dance pop royalty PNAU return to Beyond The Valley after what has possibly been the biggest year of their already storied career. Off the back of their latest album, which includes the mega smash hits “Chameleon” and “Go Bang,” the former duo who now have expanded into a trio, have set the world alight with their psychedelically inspired brand of infectious dance music. In a career full of mountainous achievements, their new album may just be their highest peak yet. What a way to see in the New Year!

Keep an eye out for more BTV news to come!

For tickets go to: www.beyondthevalley.com.au