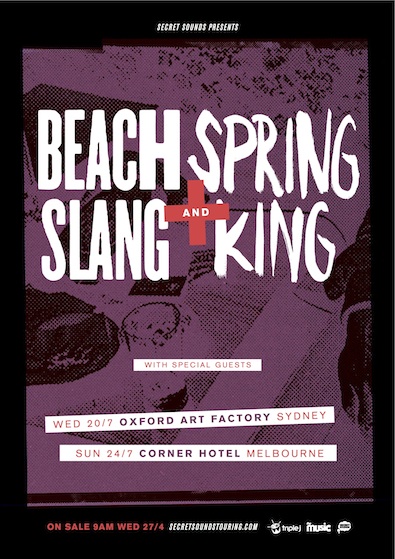 Philly foursome Beach Slang have proved themselves as a band who can write memorable songs, share that energy live and create a community of like-minded fans. The band’s full-length The Things We Do To Find People Who Feel Like Us is the culmination of their collective career and picks up where their two critically acclaimed 7-inches, 2014’s Cheap Thrills On A Dead End Street and Who Would Ever Want Something So Broken? left off. The feelings of youth and vulnerability lie at the core of Beach Slang’s music, which is part punk, part pop and all catharsis. Fresh from ten whiplash-inducing shows at this year’s SXSW, you won’t want to miss them make their Australian debut this July!

It wasn’t long after Manchester’s own Spring King burst onto the scene in 2014 that they secured themselves as “one of the most exciting live bands in the country” (DIY), and had none other than Zane Lowe as a fan. The legendary taste maker and radio host not only loved the band, he decided to make them a part of history – choosing their song ‘City’ as the very first song he would play on his debut broadcast of Apple’s Beats 1 radio. They’ve since grown to become favourites of the likes of NME, The Guardian, Stereogum, DIY and The Line of Best Fit, have been play-listed at Radio 1, 6 Music and triple j, toured with Courtney Barnett, Slaves and FIDLAR, as well as playing one of the breakout performances at last year’s installment of the legendary Reading Festival – and that’s all without an album out! The bands latest track is ‘Rectifier’ premiered in the UK as Annie Mac’s Hottest Record In The World on her BBC Radio 1 show, and then made its Australian radio debut on triple j.