The ‘She Who Rocks’ Tour, featuring Baby Animals and The Superjesus, is now calling on emerging bands from across the country to apply for a support slot on the tour using the GiggedIn platform.

The tour is set to kick off in Suze DeMarchi’s (Baby Animals) hometown of Perth on Friday, May 22, followed by shows in Melbourne on May 29 & 30, before moving on to Wollongong, Sydney, and Brisbane, followed by Sarah McLeod’s (The Superjesus) hometown of Adelaide, with Hobart, Tasmania, the last pit stop of the ‘She Who Rocks’ Tour, on Friday 26 June 2015.

The truth is, it didn’t take much to talk two of Australia’s greatest ever front women, Suze DeMarchi and Sarah McLeod, and now it’s time to find the support acts for what will be one of the biggest Aussie rock tours of the year, with emerging bands invited to register their interest via GiggedIn.

All bands will go into a public vote, resulting in a shortlist, with the support acts then chosen by an industry panel, including the ‘She Who Rocks’ promoters, Social Family Records, and the headline artists.

Voting closes on 1st May, 2015, and the winning bands will be notified the following week, on the 8th May.

GiggedIn gives collective fans all around the world a voice, in order to turn their dreams of seeing their favourite acts playing in their hometowns, a reality. GiggedIn is also a crowdsourced ticketing platform dedicated to unlocking the power of the music fan, allowing them to back their favourite local acts in order to give them an opportunity to play on major support slots for shows, tours and festivals. GiggedIn has been referred to, in the past, as being ‘the Kickstarter for events’.

The Baby Animals returned to the music scene in 2013 with their third album (the first in 20 years), This Is Not The End – a genuine rock album with a return to the classic Baby Animals form that their fans loved. This Is Not The End debuted at #19 on the ARIA album charts and took them around the country, playing sold out shows in metro areas and regional towns.

2013 also saw the reformation of The Superjesus, after an overwhelming reaction to a one-off reunion show in their hometown of Adelaide. They also went on the road for the first time in a decade, playing sold out shows across the country.

The She Who Rocks Tour is presented by Social Family Records, The Harbour Agency and Tone Deaf. 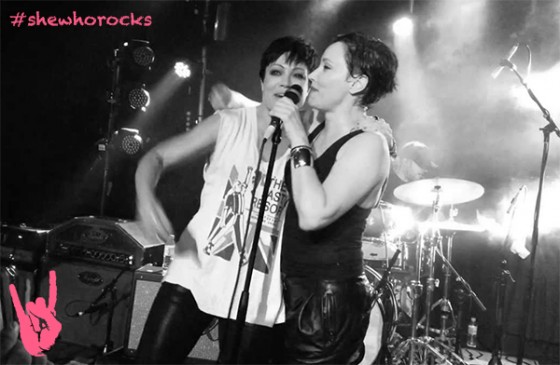