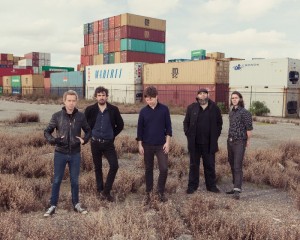 The response to the return of Augie March has been overwhelming. Demand for tickets to the special hometown shows has been intense – a week after going on sale, three shows are now sold out. In response, special fourth, fifth (and final) shows have just been added, and are on sale now.

Tickets are on sale now from h-w-l-r.com

BACK WHERE THE ADVENTURES OF AUGIE MARCH BEGAN
Way back in late 1995 the band – well they weren’t really actually a band at that point, just some friends with a notion of being a band – were invited to play at an art gallery in Brunswick Victoria for the opening of a friend’s art exhibition.

That started an eventful journey that saw them create a much-loved body of work that won multiple awards and a multitude of ardent fans all over the world.

It will be a full nineteen years later, again in Brunswick, just a few streets away from that first venue – that the band will take to the stage again after a five-year hiatus.

On October 29, 30 and now 31 Augie March will play at Howler, in Dawson Street Brunswick.
Adam Donovan, Dave Williams, Edmondo Ammendola, Glenn Richards and Kiernan Box will play a special show drawing on songs from their fabled back catalogue as well as some songs from their forthcoming new album.

The new album Havens Dumb is now open for pre-order. Vinyl, CD or digital. Bells and whistles with all:
augiemarch.com.au/havens-dumb