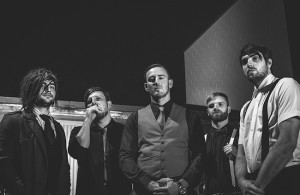 Demonstrating diverse talents for writing and performing complex Post-Melodic/Hardcore sounds, At Fates Mercy have established a truly unique foundation, whilst paving a course for success locally and abroad.

The South Australian five-piece have kept a blistering pace of momentum since forming, celebrating the triumphant release of their debut EP ‘Rebuild, Rewind’, whilst gaining national airplay and bolstering the band’s profile.

The lads have already shared stages with the likes of In Hearts Wake, Alesana (US), Buried In Verona, Hand Of Mercy, &Storm The Sky to name just a few.

2013 saw AFM soar to new heights, after they successfully released the well-received single ‘Setting Darkness On Fire’, which accompanied by a debut music video, premiered on Kill Your Stereo and Channel [V]’s LOUD. The song also saw consecutive rotation on Triple J’s Short.Fast.Loud.

Latest offering ‘No Reflection’ is available now for download on iTunes. At Fates Mercy will be announcing a run of tour dates alongside the release of their debut album, later in 2014.